Video central to what we do says ‘Live’ site reporter 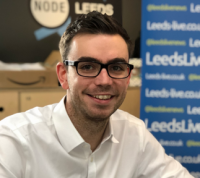 A reporter from one of Reach plc’s standalone ‘Live’ websites has cited video-led journalism as central to its content operation.

Leeds Live was launched two years ago and is being seen as the model for a new wave of ‘Live’ sites due to be launched by the publisher in areas where it does not already run print titles.

Reporter Kristian Johnson, left, told the NCTJ’s journalism skills conference in Sunderland that not being “constrained” by the needs of a traditional newspaper gave the team a lot of creative freedom.

And he claimed viewers “quite like” the site’s breaking news clips being “a bit rough around the edges” because they take them into the heart of a story.

Said Kristian: “A lot of what we do at Leeds Live is around video and pushing the boundaries of what traditional media should be.

“We are not constrained by the needs of a traditional newspaper, we have a lot of creative freedom.

“Most of what we do on video is immediate breaking news.

“It can be really rough round the edges but I think people quite like that because they understand that it’s happening now and there’s not time to produce a really polished package.”

Other video-led features have included food reviews, with Kristian and other reporters filming themselves visiting restaurants.

Kristian told the conference he also filmed himself taking a driving test after figures came out showing Leeds had one of the worst pass rates in the country.

He added: “A lot of people think you need thousands of pounds worth of equipment. You really don’t. You can film moreorless everything on an iPhone.”

He also said that good captioning was crucial as “a lot of people don’t turn the sound on on videos.”

Another Reach plc reporter, Andrew Musgrove of Newcastle daily The Chronicle, spoke about the role of podcasting in building online audiences.

Andrew hosts the ‘Everything is Black and White’ Newcastle United podcast which was the biggest growing podcast for Reach plc last year.

He said:  “There is a massive audience and there’s always something to talk about with Newcastle United, it’s always chaotic.

“The podcast is usually a bit more opinionated than what we would have online or in a match report.”