A visit by Donald Trump and NATO leaders provided a web boost for a weekly newspaper.

Watford Observer journalists were up before dawn yesterday to cover the NATO leaders’ meeting at The Grove, on the edge of Watford.

The organisation was marking its 70th anniversary on Wednesday, and the Observer ran a live blog and published a number of stories to mark the occasion.

The team also used Facebook live in an interview with peace protesters, pictured below, who gathered at the gates to The Grove demonstrating against the presence of both the US President and NATO. 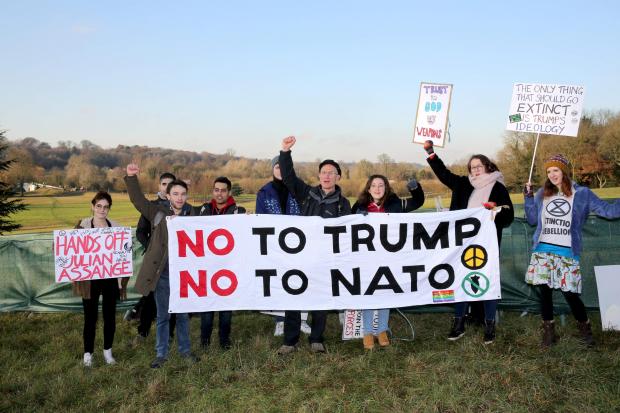 Observer editor Victoria Birch told HTFP: “The streets around the luxury hotel and golf course had been on security lockdown for days, with one major road into town closed throughout the day of the event.

“The world’s eyes were turned on the Hertfordshire town as US president Donald Trump announced he would not be holding a press conference after the event, apparently a reaction to a recorded conversation in which Canadian Premier Justin Trudeau’s criticised his lateness.

“The reporting team of Nathan Louis, James Cowen, Joseph Reaidi and Yana Trup, with photographer Holly Cant and audience and content editor Ann Yip, kept a live blog rolling from 7am, featuring not only international news updates, but readers’ pictures and video of helicopters and traffic arriving.”

Victoria added: “Our readers were hungry for the news and the live blog had thousands of hits. Out of the top ten most read stories on our site on Wednesday, seven were NATO-related.”