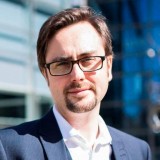 A regional daily editor is leaving his role after two-and-a-half years saying his “time in the chair is up.”

Gavin Thompson has announced his departure from the editorship of the Western Daily Press, which he has run since June 2016, and its weekly sister title the Bath Chronicle, which he took on the following year.

Gavin, left, posted the news on Twitter yesterday alongside a picture of the back page of yesterday’s Bath Chronicle which he described as “apt headline.”

HTFP understands Gavin’s departure is part of a restructure of Reach’s print operation in the South-West of England which has also seen Tim Lethaby, editor of seven weeklies in Somerset, leave the business today. His successor at both the Press and the Chronicle is yet to be announced. 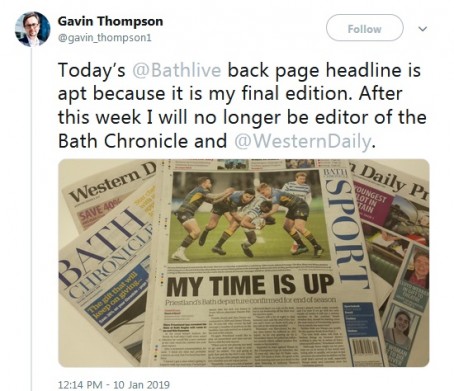 Said Gavin: “While the industry faces ever growing challenges, both titles are profitable and among the best performing in the company. Most importantly, they are still worth reading and buying.

“I am very proud of both newspapers and the people – staff, freelance and contributors – who make them successful. I leave both titles in good hands.

“As editor, I have championed Bath and the wider West region, the business community and, with the WDP in particular, rural issues. I will keep doing so and will also continue in my role as a director of the Bath Business Improvement District.

“Being made editor of a regional newspaper was a dream come true and I’ve loved it. I wish both titles and all who work in local news every success in future. But my time in the chair is up and now I move on to new adventures.”

Gavin, a former chief sub-editor and assistant editor at the Bristol Post, took on the WDP in 2016 following a restructure which saw his predecessor Rob Stokes leave Reach forerunner Trinity Mirror.

The addition of the Chronicle to his portfolio came in a later restructure in which its editor Rachael Sugden moved to become TM’s senior editor in Gloucestershire.

The move saw WDP deputy editor Richard Bache take temporary charge of the newspaper to allow Gavin to concentrate initially on the digital remit of his expanded role.

HTFP has approached Reach for a comment on Gavin’s departure.