A retired regional journalist has ended his 18-year campaign to tackle the misuse of apostrophes – claiming “ignorance and laziness” have won.

John Richards, who worked for Brighton daily The Argus among other titles, has decided to close the Apostrophe Protection Society, which he founded in 2001.

The 96-year-old, pictured below, had been inspired to launch the organisation due to his irritation at the increasing misuse of apostrophes in the 1990s.

John, helped by his son Stephen, began delivering polite letters on headed ‘Apostrophe Protection Society’ notepaper through the door of anyone he found breaking the rules in Boston, Lincolnshire, where he lives. 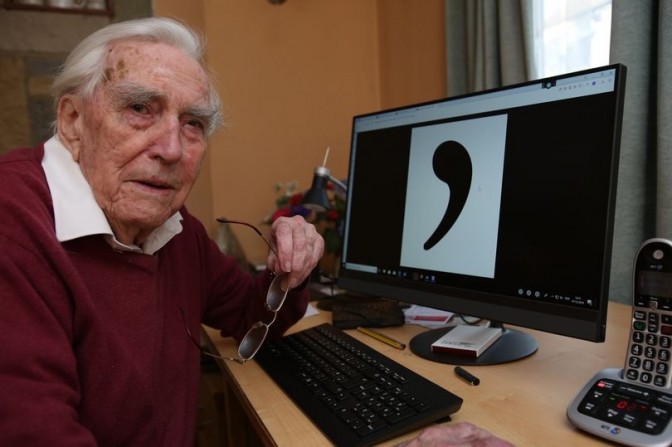 After setting up the society, he received over 500 letters of support, not only from all corners of the United Kingdom, but also from America, Australia, France, Sweden, Hong Kong and Canada.

In an announcement on the APS website, he said: “With regret I have to announce that, after some 18 years, I have decided to close the Apostrophe Protection Society.

“There are two reasons for this. One is that at 96 I am cutting back on my commitments and the second is that fewer organisations and individuals are now caring about the correct use of the apostrophe in the English Language.

“We, and our many supporters worldwide, have done our best but the ignorance and laziness present in modern times have won.”

A further announcement today reads: “John Richards has announced the he is disbanding the Apostophe Protection Society.

“Since the announcement, this site has had a 600-fold increase in traffic, which is proving expensive. So we have decided to close the site until the new year.

“When it returns, webmaster John Hale intends to keep the site available for a few more years.

“Thank you for your interest.”