A regional daily reporter has narrowly failed in a bid to polish off what is billed as the biggest breakfast on his patch.

Harry Bullmore, of Brighton daily The Argus, took on the ‘Truckload Challenge’ after being ‘volunteered’ for the job by his news editor.

The challenge was created by Wheelies Cafe Diner in Portslade, near Brighton, and consists of two fried eggs, three bacon rashers, three sausages, baked beans, two tomatoes, a slice of fried bread, chips, two hash browns, two slices of black pudding, a buttered slice of bread and another of toast – all to be eaten within the space 10 minutes.

Harry, pictured below, recounted his attempt to polish off the plateful in a first-person piece for the paper. 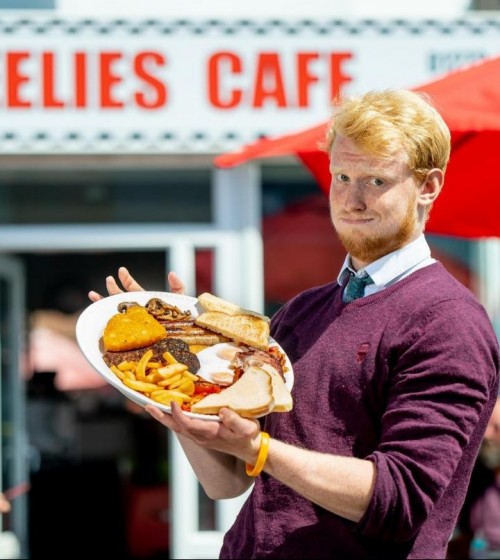 Wrote Harry: “True to their name, the meal wheeled out by the Wheelies chefs was the real deal. A massive plate of terror piled high with breakfast delights.

“After a couple of cursory pictures, in which my biceps burned under the devastating weight of the plate, a stopwatch was clicked and I dug in.

“The breakfast tasted amazing. I tackled the vegetables first before layering up the toast, bacon, beans and eggs in an attempt to be time efficient.

“After five minutes I was pretty chuffed with my progress, having made a decent dent in the meal. I overheard one spectator mutter to another that “he might actually do it you know”.

“But a couple of minutes later I made the inevitable transition from chuffed… to stuffed.

“I had hit a wall formed entirely of carbs. The hash browns, chips and final slice of bread I had left until last seemed to tower over me, casting me into their satiated shadow.

“I continued to line the chips up on the fork, three at a time, loading them into my mouth, but the clock continued to tick down.

“It hit zero. Two hash browns, a couple of stray chips and some buttered bread still sat on the plate in front of me. I had failed.”

However Harry fared better than his editor, Arron Hendy, who ended up in A&E in 2014 after attempting a similar challenge – eating Brighton’s hottest burger.

Arron, who was assistant news editor at the time, was taken to Royal Sussex County Hospital along with reporter Ruari Barratt after taking a single bite of the snack from Burger Off, in Hove. 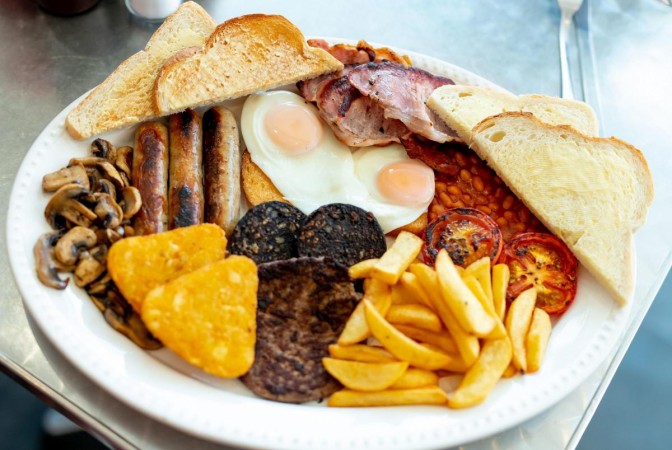