A regional publisher has uncovered five billion pounds of costs incurred through private finance deals across the country after one of its newspapers investigated the issue on its patch.

JPIMedia’s investigations team was inspired to look into the issue after the Yorkshire Evening Post revealed in June how Leeds City Council was having to plough an extra £1m into the spiralling costs of its Private Finance Initiative schools.

The 10-strong team, made up of journalists working for various JPIMedia titles, has found that the cost of schools, hospitals and other public infrastructure built and run by private companies through PFI deals has risen by nearly £5 billion since they were agreed.

PFI began in 1992 but faced heavy criticism for being poor value and the Treasury banned new deals from being signed last year. 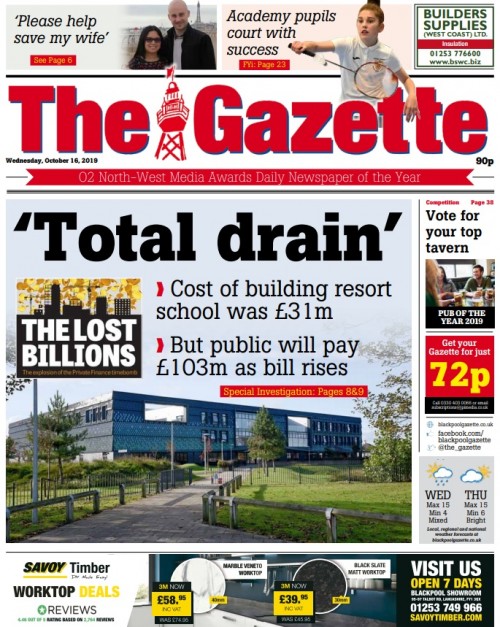 How Blackpool daily The Gazette covered the investigation

However, some 700 existing schemes will continue to run for many years to come.

The team discovered one NHS maternity unit in Scotland, built through a £48m PFI deal, has been closed for nearly two years but the taxpayer must still pay millions for it until 2033.

Other revelations include the fact that 11 PFI deals signed off by Highways England, outsourcing the running of some of England’s busiest motorways and A-roads, are expected to cost £786m more than originally predicted.

The team also found evidence of public authorities being billed large amounts for seemingly minor changes to buildings, such as a school charged £25,471 for three parasols, a hospital billed £5,334 for a new sink and a police force which paid £884 for a chair.

National and localised stories based on the investigation are running across dozens of JPIMedia titles this week including the i, The Scotsman, Yorkshire Post, Belfast News Letter, Blackpool daily The Gazette, Portsmouth daily The News, Edinburgh Evening News, Lancashire Post and Peterborough Telegraph.

JPIMedia investigations team news editor Claire Wilde said: “Back in June our Leeds title, the Yorkshire Evening Post, ran a story revealing Leeds City Council was having to plough an extra £1m into the spiralling costs of its PFI schools.

“The YEP editor had a simple question – if this is happening in Leeds, is it happening everywhere?

“We didn’t expect at the time that we would uncover nearly £5 billion in added costs across the UK.

“It is truly shocking that this much public money is being lost – money that could be better spent across our NHS, schools system, roads network and emergency services.” 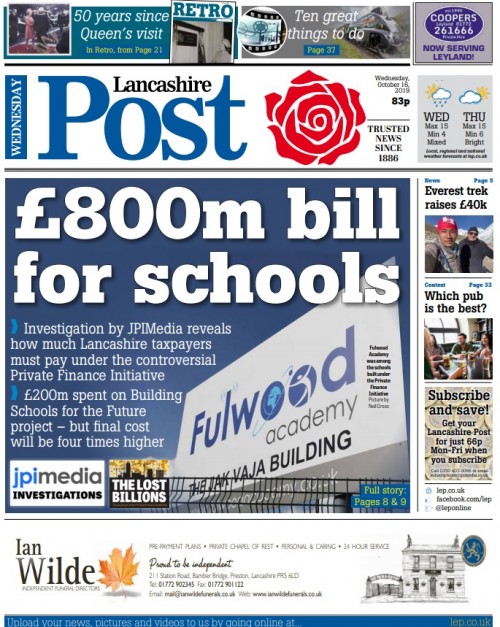 The Lancashire Post also splashed on the team’s findings