Boris Johnson is facing a media backlash after journalists were barred from asking the new Prime Minister questions on camera during a visit yesterday.

Reporters from the South Wales Argus and Wales Online were among those present during a visit by the new Prime Minister to Newport, where he toured a chicken farm.

However, according to Welsh news service Nation.Cymru, those present were told they could only asked Mr Johnson questions if they did not record the answers.

Downing Street said Mr Johnson gave a six-question interview on camera at the visit, which was then made available on a “pooled” basis – but the National Union of Journalists has accused him of “running chicken.” 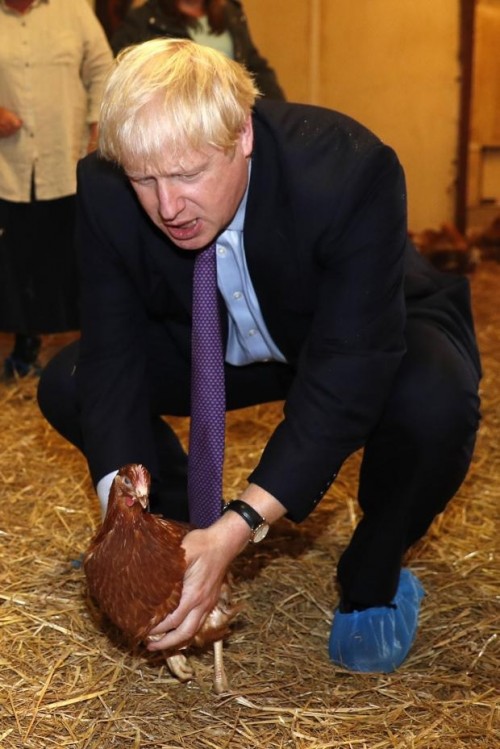 “Also for the record, I refused this offer. I hate to have turned down the chance to challenge Boris Johnson but I wouldn’t have been able to broadcast any of it. I’d have had to read quotes to the audience tonight.

“I do think it’s a strange way to begin for a new Prime Minister who says he wants to strengthen the union to treat the main national news outlets this way.”

BBC journalist Felicity Evans added: “On Boris Johnson’s first visit to Wales as PM, BBC Wales News and ITV Wales are refused the opportunity to ask him a single question on camera.”

Nation.Cymru also reported journalists were held in a “tin shed” and were prevented from accompanying Mr Johnson on a tour of a farm.

According to Wales Online, a visit to Brecon was carried out under similar rules – with one of its reporters and two local journalists being allowed a single question and then being asked to remain in the interview room while Mr Johnson met staff as he exited the office.

The Welsh executive committee of the National Union of Journalists has said it “strongly condemns” the decision.

A statement by the committee reads: “Correspondents from Welsh broadcasters and newspapers (which require video of interviews for their websites) have different questions to ask than correspondents from London-based media.

“If the Prime Minister restricts himself to a single clip for the network pool, plus a brief off-camera ‘huddle’ with journalists, then essentially the Welsh media is being asked to cover a publicity stunt without the chance to question him.

“Journalists must be able to hold our elected representatives to account on behalf of the public and the Prime Minister’s answers must be publicly available.”

A spokeswoman for 10 Downing Street told HTFP: “[Mr Johnson] did a huddle with regional journalists and also gave six questions on camera in a pooled media interview.”

HTFP has approached both Wales Online and the South Wales Argus for a comment.