A regional daily has officially debunked The Sun’s famous ‘Freddie Starr at my hamster’ headline following the comedian’s death.

The Leicester Mercury splashed on Saturday with the headline ‘Freddie Starr did not eat my hamster’ after tracking down the rodent’s owner Louise Fox, who lives in the Leicestershire village of Desford.

In 1986 The Sun ran the infamous story about putting the live pet, called Sonic, in a sandwich and sticking it in his mouth.

The tabloid made reference to the story in its coverage of Mr Starr’s death, splashing on Friday with the headline ‘Freddie Starr joins his hamster’.

Mr Starr had previously denied eating the rodent, and former model Ms Fox, who was friends with him in the 1980s when she lived in Liverpool, revealed the truth after talking to Mercury business editor Tom Pegden. 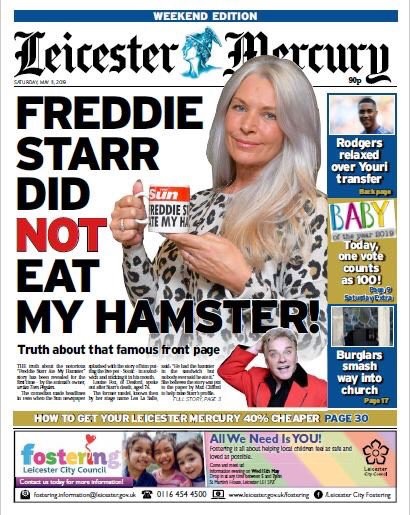 She told the Mercury: “It was my hamster. It was a long, long time ago and it’s not the same story that was printed in the paper. The thing was it arrived in the paper five years after the event and it was all misconstrued.

“He had the hamster in the sandwich but nobody ever said he ate it. There was nobody more shocked than me when that headline came out.

“He had been working in Wythenshawe, in Manchester, and we had all been late back and he would always be hungry. He would say ‘go and make me a butty’ and this particular time I said ‘sod off go and make your own’.

“So he just went and got two big slices of bread, doorstop things, and buttered them and when he sat down on the settee he had the hamster between them.

“He did bite into the bread, but not the hamster. I was upset because the hamster was covered in butter which took two days for it to lick off.”

Sonic died of natural causes a couple of years later, but Ms Fox told the Mercury she understood the story was put in The Sun by disgraced PR man Max Clifford to help raise his client’s profile after a lull in his popularity.

Ms Fox, 56, added: “It’s sad about Freddie – we knew him very well. He used to come and stay with us and he was totally unpredictable and very energetic. You never knew what he was going to do next.

“It was all very sad about him falling off his pedestal. Lea La Salle was my stage name back when I knew him and I was not always terribly happy with him in the years that followed about what he said.

“I was very bitter about it and don’t think it did my career any good whatsoever. People would say I benefited hugely but I never did, but I think it may have rekindled his career. Max Clifford had a lot to do with that.

“But I’m very sad for poor Freddie so it is all bitter sweet.”

Tom told HTFP: “It was good to get the chance to set the record straight on what was such a famous front page headline. At the same time I had to be tactful because we were doing it because Freddie Starr had died.

“I was mindful of that when I was talking to Louise Fox, the woman who had owned the hamster, and I think she was too. Hopefully that came across in the tone of the story.

“But she was happy to talk because she felt she’d been hard done by by the original story – I was surprised it had taken until now for her to talk. She was great.

“The whole thing got a bit complicated when the Daily Mirror – part of the same group as Leicestershire Live – got involved, and I also couldn’t help thinking The Sun were going to track her down and publish something first. Luckily that didn’t happen.” 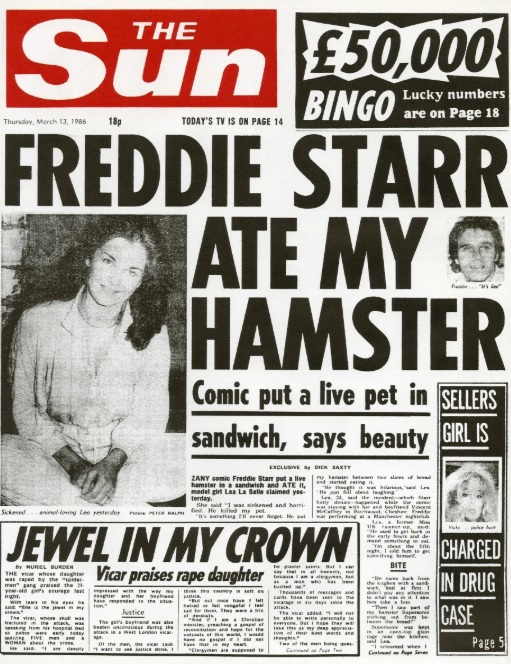