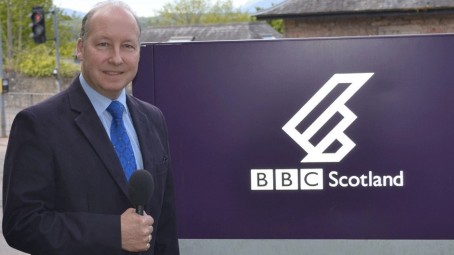 A journalist who was the first TV reporter on the scene of the Lockerbie disaster is to receive a lifetime achievement award following his recent retirement.

Craig Anderson, above, is to be this year’s recipient of the Barron Trophy, which recognises lifetime achievement in journalism in the Highlands and Islands.

The honour will be presented at this year’s Highlands and Islands Press Ball and Media Awards, due to be held in Inverness on 1 February.

Craig recently retired from his role as the BBc’s Highlands and Islands reporter after two stints with the corporation spanning 34 years.

Craig began his career in journalism working for a community newspaper in Aberdeen before joining a news agency based in Brussels, from where he moved to become The Herald’s European Correspondent.

He returned to Scotland in 1984 to work for what was then BBC Radio Highland.

One of his earliest successes in TV journalism came while he was working late in the BBC’s Glasgow newsroom and the news editor dispatched him to vague reports of a plane crash.

It was the Lockerbie disaster and Craig was the first TV reporter on the scene.

Craig subsequently spent several years as a freelance broadcaster and journalist, setting up his own production company, before re-joining the BBC as a senior reporter – working mainly for Reporting Scotland on BBC1 television and for Radio Scotland’s news and current affairs output.

Based in Inverness, his geographical patch stretched from Elgin in the east to Oban on the west coast, as well as the Hebrides and Orkney and Shetland.

Gordon Fyfe, Chairman of the HIPBMA Awards Committee, said: “For many viewers and listeners, Craig was the face and voice of the BBC in the Highlands and Islands with his well researched, informative and often humorous reports.

“He joins a distinguished band of leading journalists to have received this prestigious award, which recognises a lifetime of achievement.”