Journalist ‘in complete shock’ after wife dies in car crash 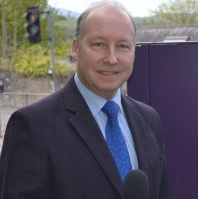 A journalist whose wife was killed in a car crash says her death has left him in “complete shock”.

Craig Anderson’s wife Joan was involved in a fatal two-vehicle collision on the B9160, which runs through the peninsula known as the Black Isle, in the Scottish Highlands.

Craig, pictured left, used to work for Glasgow-based daily The Herald before joining the BBC and had been with 63-year-old teacher Joan for 43 years.

Mrs Anderson was driving a blue Skoda Octavia when she was involved in the crash at around 11.40am on Saturday.

Emergency services rushed to the scene but it was later confirmed she had died in the collision.

In a statement released through Police Scotland, Craig, who recently retired, said: “All of us are in complete shock at the moment. Joan and I were a couple for 43 years, since our student days in Aberdeen, and Joan was the most wonderful wife, mother and grandmother.

“She loved life and lived it to the full. Even at this early stage the many expressions of support and sympathy we have had from friends and colleagues prove how well loved and respected Joan was.

“In her working life as a teacher she was dedicated and so well regarded professionally. And to our family and friends she was the dearest friend anyone could have wished for.”

Earlier this year Craig, who was the first TV reporter on the scene of the Lockerbie disaster, received the Barron Trophy, which recognises lifetime achievement in journalism in the Highlands and Islands.

The honour followed Craig’s retirement from his role as the BBC’s Highlands and Islands reporter after two stints with the corporation spanning 34 years.

A man and a woman inside a green Skoda Yeti were also involved in the crash, sustaining serious but not life-threatening injuries.

Road Policing Sergeant Alan Henderson said: “Our thoughts remain with Mrs Anderson’s family and friends.  Our enquiries into the circumstances continue and anyone with information can contact police on 101, quoting incident 1682 of September 21.”