Cancer-stricken photographer considers action after being axed by daily 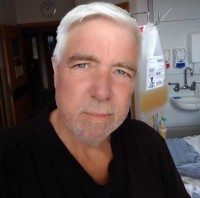 A photographer currently battling cancer is considering legal action after being made redundant by a regional daily.

Geoff Abbott, who worked for North Wales daily The Leader for four years, says he may pursue a claim of unfair dismissal against owner Newsquest on the grounds of either disability or age discrimination.

Geoff, picture below, was diagnosed with blood cancer around a year ago and says he was the only remaining staff photographer working on The Leader at the time of his recent departure.

The 59-year-old is currently in hospital undergoing chemotherapy and is set to undergo a stem cell transplant in Manchester later this year after a donor was found in Switzerland.

Speaking to HTFP from his hospital bed, Geoff told HTFP: “I’m considering [a claim of] unfair dismissal under ageism or disability discrimination.”

Geoff has worked on and off as a journalist and photographer since the 1990s, having previously served in the Royal Air Force.

Other titles he has worked for include the North Wales Weekly News and North Wales Chronicle, while in his most recent role he also covered the Rhyl Journal and Denbighshire Free Press.

Geoff did not attend consultation meetings due to his illness, but was advised by the National Union of Journalists throughout the process.

Of Newsquest’s decision to make him redundant, he said: “They’re devaluing their products for customers by getting rid of photographers. They should have left a scratch crew.”

He added: “I could cover the daily and two weeklies at the same time with support from reporters using their mobile phones, but they would need the right training to maintain the quality of the product for the readers and advertisers.”

A Newsquest spokesman said: “Following a review of the North Wales business, the company has decided to reduce the number of photographers we have. This has unfortunately led to the redundancy of Geoff Abbott following the conclusion of a consultation process.

“We would like to thank Geoff for his contribution to the business and wish him well with his ongoing recovery from ill health.”