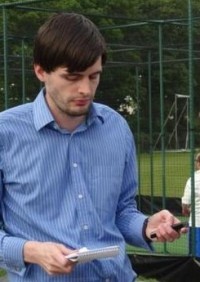 Adam Lord, pictured, takes up the newly-created role which will see him writing for The Bolton News, Lancashire Telegraph, Bury Times, The Oldham Times and The Messenger.

His appointment follows the departure of former head of sport Neil Bonnar, who worked at The Bolton News for 32 years.

Jessica Taylor has been appointed to the role for the News Shopper series, covering Lewisham.  She joins from the London Evening Standard where she was a digital reporter.

Elsewhere Sam Brooke has joined Brighton daily The Argus while Sophie Edwards will be working across Newsquest’s Wrexham and Flintshire titles, which indlude The Leader.

And Cumbria-born Rebecca Henrys has returned to her hometown patch to become communiyy reporter for the News & Star and Cumberland Star.

* Glasgow-based daily The Herald (Glasgow) has appointed Marianne Taylor as its literary editor, in addition to her existing role as features writer and columnist. Sports writer Alison McConnell is leaving the paper to go freelance.

* Conor Matchett has joined JPIMedia as a digital journalist working across the i, The Scotsman and the Yorkshire Post. He previously worked across Archant titles the Eastern Daily Press, Lowestoft Journal and Thetford & Brandon Times as a reporter.

* Recently-launched Reach plc website MyLondon has appointed Owen Sheppard as a local democracy reporter. Owen has previously worked as a reporter at the London Evening Standard and the Southwark News.

* Paul Philbin has moved from the role of digital distribution editor at the Liverpool Echo to become its social media editor.  Meanwhile Daily Telegraph editorial graduate Jasmine Cameron-Chileshe has joined the Echo as a reporter on a three month secondment.

* News agency SWNS has appointed Joey McCarthy as a reporter covering Cambridge and the surrounding area.

* Ruth Mosalski has been promoted to the role of political editor at Wales Online, with senior reporter Will Hayward replacing her as social affairs correspondent.

* Joe Cawthorn has joined the Edinburgh Evening News as digital editor. He was previously live and trending content reporter role at sister title The Yorkshire Post.

* Adam Everett has moved from the role of health reporter to crime reporter at the Warrington Guardian.

* Senior reporter Ciaran Shanks has been appointed court reporter at the Dundee Evening Telegraph. Ciaran has also previously worked as a senior reporter for the Irvine Times.

* Alex Cutler has been promoted to education reporter at the Dorset Echo, replacing Caroline Lewis.