Journalists have launched a campaign to keep a regional daily’s office on its patch amid plans to move the newspaper to a sister title’s HQ.

The National Union of Journalists says it is entering talks with Reach plc over the planned closure of the Burton Mail’s office, pictured below, next month.

HTFP revealed last week how the company was proposing to relocate Mail staff 12 miles away to the Derby Telegraph’s office at least two days a week, with them working from home the remainder of the time.

But the local NUJ chapel instead wants the company to resource a “new and cost-effective base for journalists” in Burton upon Trent, and is also seeking guarantees that the Mail team will remain intact and will not lose out financially due to working from home. 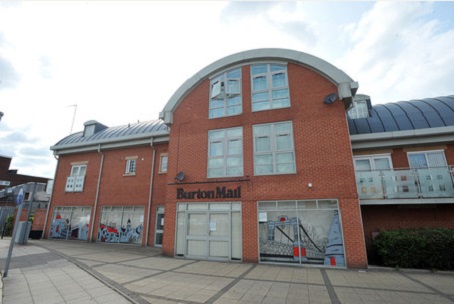 The chapel believes Reach’s actions “imply a move towards closing the newspaper” and has called on management to rescind their decision.

Chris Morley, NUJ Northern and Midlands senior organiser, said: “We are entering talks with the company about a very significant development for our members which some fear may compromise the future of the Burton Mail as a proud daily publication.

“This newspaper and its brand are highly regarded locally and have a successful history in representing this unique and very individual town.

“It is crucial that the journalistic team that does so much to properly reflect that is not broken up and its character destroyed. We will be working with the company to make this both a sustainable and successful business.

“We hope the company will seriously consider all the options and take the right choices, not necessarily the easy but unsustainable ones.”

The chapel says it has approached local businesses, politicians, civic society organisations, advertisers and readers to support the campaign.

A spokesman for the company previously told HTFP: “We can confirm that the Burton Mail office will close on 10 January.

“We are currently consulting with the 12 affected people on our proposal that they work from the offices of the Derby Telegraph at least two days a week and from home the rest of the time.

“There are no redundancies as a result of this change and we are committed to listening to our employees and keeping them fully informed.”