Journalist who had two spells at hometown daily dies aged 79 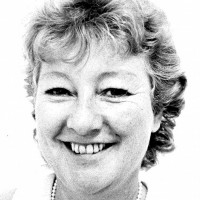 A journalist who worked for her hometown daily in two spells spanning four decades has died aged 79.

Tributes have been paid to Sue Nuttall, left, who worked at Wolverhampton daily the Express & Star in two stints, first in the 1950s and then from 1967 to 1985.

During her time with the Express & Star, Sue covered Stafford for the newspaper.

She also worked at a handful of other newspapers during her career including the former British tabloid publication Reveille Magazine, owned by the Mirror Group.

Sue’s widower Peter, 84, told the E&S: “She always wanted to be a journalist since she was at school. Sue was a really good journalist and that is why she was able to get jobs at newspapers around the country.

“She had great faith in people and always believed the best in people. Sue never really had a bad word to say about anyone. She knew you shouldn’t draw conclusions about a person until you really knew them.

“She was a great human being and a very kind person.”

Wolverhampton-born Sue began her journalism career as a cub reporter at the Cannock Chase Courier in 1954, later moving to the Bridgnorth Journal and Shrewsbury Chronicle prior to her first E&S spell.

Her editor at the Chronicle recommended her for a job with Reveille, in London, and it was while on a train journey home from the capital that she struck up a conversation with fellow Wolverhampton native Peter.

The pair later moved back to their hometown and married in 1967, later moving to the Stafford area before relocating to Middlesex due to Peter’s job.

After leaving the E&S for a second time due to the move, Sue worked at a newspaper in Hertford and then the Bedford Herald, where she stayed until retirement.

The couple had lived in Northampton in recent years to be close to their daughter Justine.

Justine said: “Mum loved being with people and was always interested in other people, what they had to say and the stories they had to tell, that’s perhaps what made her such a good journalist.

“She was patient, kind and understanding, never having a bad word to say about anyone, and always saw the best in everyone and I will cherish all these memories of her.”

Her funeral will take place at Northampton Cemetery at 2pm on 15 August.