A regional daily journalist undertook a ‘stare off’ challenge against a seagull to test out a new theory that it prevents the birds from stealing food.

Dundee Evening Telegraph reporter Kenny MacDonald held the “battle for survival” against gulls in the city after University of Exeter researchers found the birds were more likely to strike when they can swoop in on food under the radar and avoid the gaze of their victims.

Kenny took his own lunch into Dundee’s City Square to test whether “Scottish” gulls would react the same as their “English” counterparts.

In a piece about his test, he reported the bird in Dundee were “made of sterner stuff.” 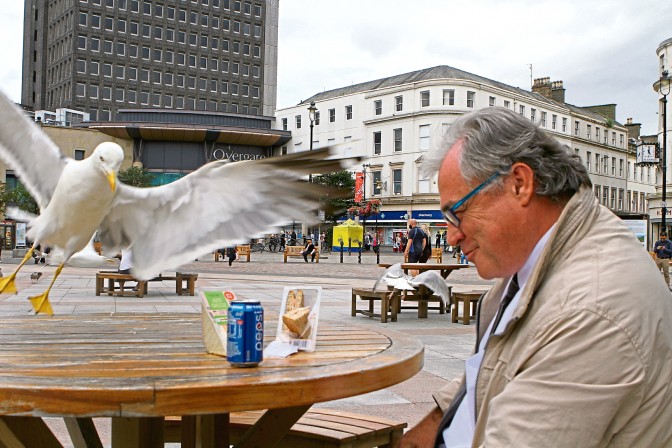 Kenny faces off against the seagull

Kenny had offered two packets of sandwiches, one cheese and one ham.

He wrote: “I maintained my stare as the gull edged closer and closer to the morsel of crust on the table. I didn’t blink, not once. Then, suddenly, out of nowhere three massive gulls swooped from all angles to rob their rival of the prize. You blink, you lose.

“I had covered my eyes and my head. My bottle had crashed. I feared for my life. One of the gulls, the prizewinner, flapped those enormous wings and I was gone. It honestly seemed to be as wide as the table.

“Before the carnage had ceased, another hurtled in on the blind side and pierced the closed sandwich packet with that terrifying beak and made off with it in one movement. Terrifying.

“Yet those pesky Exeter researchers claimed they found most birds will not take food when close to humans. Rubbish. Just ask Dundonians.”

Kenny told HTFP the issue had been a “real talking point” in Dundee.

He said: “It was genuinely one of the scariest things I have done and that includes a parachute jump for charity back in the day. One of the photographer’s suggestions was to hold out a piece of sandwich to coax the gulls down, but I bottled it , especially with the speed that they hurtle down at you and the size of the beaks.

“I have worked previously in Inverness and Dumfries where there are similar problems with gulls snatching foodstuffs from people ranging from kids to grannies, but the Dundee version are definitely the most brazen.

“It is a real talking point in the city and nearly everyone has a horror story to tell of snatch squads stealing sausage rolls, cheeseburgers and chips. And I have even seen a grown man scurry away with his bag of chips after a gull swooped from behind to try and snatch them.

“My worst moment wasn’t so much the stare, but the terrifying speed of the gulls dive bombing and also snatching an unopened sandwich pack by piercing the front with its beak and flying off all in one movement. One of our readers rightly pointed out on the day that it is no use trying to stare the birds down because they only stare at the food.”