Journalist credited with first printed use of newly-coined word 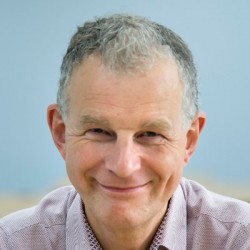 A journalist has been credited with the first use of a newly-coined word in print after it appeared in his newspaper.

The Cambridge Independent has carried the first recorded use of the word ‘nepocide’, which was coined by Professor Tony Booth, of the University of Cambridge’s Faculty of Education.

According to the Independent, nepocide, a portmanteau of ‘neoptism’ and ‘genocide’, describes “the willingness of the current generation to sacrifice the wellbeing and even survival of future generations”.

Mike, pictured, told HTFP he had “become the midwife to a new word”, adding the Independent’s online report on its coinage had become its most read story on Friday.

He added: “[Tony] and another campaigner started talking about how Edmund Burke had originally considered the responsibilities of one generation to the next.

“Tony then said that he had begun considering this in the Thatcher years, when ‘one generation passes poverty on to the next generation’, then he added almost as an aside that what’s happening now with climate breakdown is on a whole different level, and in fact he’d coined a word for it: nepocide.

“As soon as he said it I was like ‘Bingo – now we’ve got a story!’. I sat on it overnight to work out how best to cover both the usage of the new word and the event, and it’s just gone from there.

“My editor Paul Brackley was delighted it was our top post on Friday. It’s an accurate term for what’s going on and I’d be delighted for Tony if it gains traction.”