Journalism students have called on their university union to back the industry they hope to enter by stocking newspapers in its shop again.

Students at the University of Sheffield have launched a petition calling for Our Shop, a mini supermarket in the institution’s Students’ Union, to reintroduce papers to its aisles.

It is understood the union stopped stocking daily papers in the shop three years ago due to “low demand”.

But second-year student Alfie Robinson, pictured, told Sheffield daily The Star he and his coursemates had been inspired by one of their lecturers to launch the campaign to bring them back. 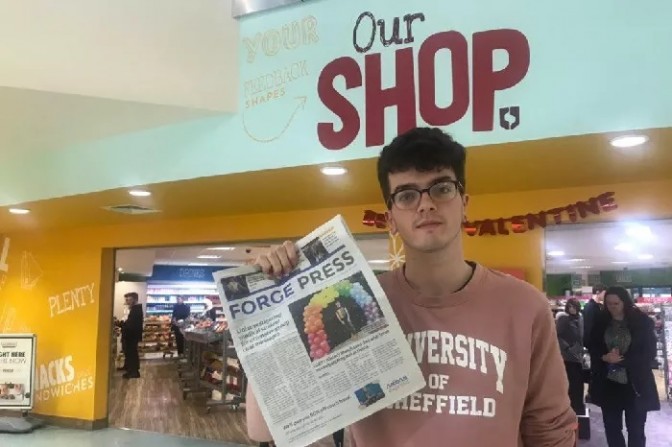 Alfie, 25, said: “Since we have got the number one journalism department in the country, they tell us almost every day that we should be picking up newspapers.

“I have been thinking about it for a while and Dave Holmes, one of our lecturers, was saying that he was struggling to pick up a newspaper himself and he put an appeal out to journalism students saying that it was our future in our own hands.”

The petition calls for the Students’ Union to “support the future” of journalism students and the print industry.

Speaking to HTFP, Alfie said: “As far as I’m aware they stopped selling papers around three years ago because of a low demand. The reception of the petition has been great both from the department of journalism studies and my fellow students, we’ve already reached the amount of support needed for a response to be given by one of our SU officers.

“I’m just waiting to hear from them, but they should now reach out to me so we can work out whether or not it would be possible to get the papers back into the shop.

“There’s definitely the readership here at the uni and with us having the number one journalism department in the country our Students’ Union should support the industry that a percentage of its students could possibly be going into.

“University is about shaping our futures so we need to help protect the industries that we are going to be working in.”

HTFP has approached Sheffield Students’ Union for a comment.