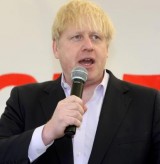 Boris Johnson has pledged to speak to a weekly newspaper “at greater length” after the title criticised an election campaign visit by the Prime Minister to its patch.

Mr Johnson, pictured, has promised a longer interview to the Mansfield Chad following what the paper called a “poorly managed” visit to a hospital in Sutton-in-Ashfield.

Chad reporter Andrew Topping and photographer Brian Eyre were told by a Tory Party official to be at the hospital at 8.15am on Friday morning, but were given less than five minutes to interview Mr Johnson along with BBC Radio Nottingham and a reporter from LBC.

National journalists were given around 30 minutes with Mr Johnson during the same visit.

“‘Arrive at the hospital no later than 8.15am’, the Conservatives told us last night, as reporter Andrew Topping and photographer Brian Eyre scurried to the Sutton site expecting an exclusive interview.

“What your Chad, alongside BBC Radio Nottingham and a reporter from LBC, were greeted to, was a badly timed visit from the Prime Minister and his entourage – and the realisation that local press are at the back of the queue in this election trail.

“The national media was given about 30 minutes in a room with Mr Johnson, going over various new policies and talking about his visit to Sutton’s hospital. Yet the regional press was scurried into a mocked-up hospital ward for exactly four minutes and 42 seconds of discussion – split between three outlets.”

After the critical piece was published, the Prime Minister issued a statement pledging to return to answer questions from the Chad – although he wrongly described the Nottinghamshire paper as being in Derbyshire.

Mr Johnson said: “Local papers are so important for our communities, and The Chad is clearly incredibly valued locally. I can’t wait to get back up to Derbyshire [sic] and speak to them at greater length about my plan to deliver Brexit and unite the country to deliver the first rate public services we all rely on.”

But Labour leader Jeremy Corbyn was quick to seize on Mr Johnson’s apparent gaffe, saying: “On my frequent visits to North Notts, I’ve always been happy to sit down for an interview with the Chad.

“Every politician should speak to local papers when they can. It’s not only about being held to account but you also learn a lot about the issues facing people.”

New Statesman political correspondent Patrick Maguire wrote that the initial failure to engage with local press suggested the lessons of the previous election campaign by Theresa May had not been learned.

He said: “The Chad, understandably, ran a lengthy piece detailing their shabby treatment at the hands of the Conservative campaign operation. It was reminiscent — eerily so — of stories run by the Plymouth Herald and Cornwall Live in the 2017 campaign, both of whose journalists were given similarly derisory treatment by Team May.

“As I wrote on Friday, the local air war matters in marginal constituencies. Regional journalists have no qualms about kicking up a fuss when promised access does not materialise, as the Chad did so effectively. Failure to engage with the local press can very quickly become a national story. In May’s case, it reinforced perceptions that she was aloof, unempathetic, robotic.

“None of the significance of this has been lost on Conservative candidates locally, at least one of whom complained to CCHQ in the aftermath of Friday’s visit. Yesterday, Johnson pledged to return for a proper interview. The tone of his statement could reasonably be described as grovelling.”