Former editor named Businessman of the Year on old patch 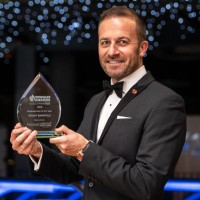 A former regional editor has been named his old patch’s Businessman of the Year.

Stacey Barnfield, who edited the Birmingham Post between 2013 and 2015, won the accolade at the Birmingham Awards, which celebrates the best of the city.

He was presented with his award in a ceremony held at the Library of Birmingham on Saturday.

Stacey, pictured, told HTFP: “As a born and bred Brummie simply being nominated for such a prestigious award in my home city was fantastic.

“To then win the category of Businessman of the Year is extra special. I’m over the moon.

“Knowing first-hand the highs and lows of launching and running a small business during turbulent economic times, I congratulate all my fellow finalists and winners at the Birmingham Awards.

“They deserve their moment in the spotlight.”