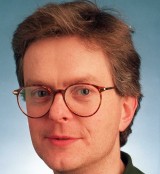 A former regional daily chief sub-editor known for his “integrity and intelligence” has died aged 61.

Tributes have been paid to Paul Woodhouse, left, who worked for Yorkshire Post Newspapers between January 1988 and January 2014.

While with the Leeds-based group, he rose to the role of chief sub.

After Paul took redundancy from the YEP he worked on the Press Association’s page production contract with the Daily Mirror and then, when the contract ended, joined the Mirror as a sub.

His wife Geraldine, who he met while at the University of Nottingham, told the Yorkshire Evening Post: “Colleagues have paid tribute to his integrity and intelligence. The abiding memory we all have of him is his quick wit and sense of humour.”

Born in Exeter, Paul began his career in journalism on the Widnes Weekly News, then moved to the Bradford Telegraph & Argus and later YPN.

In January 2013, he was presented with a long service award to mark 25 years at the company.

Former colleague Liz Carnell said: “He was one of the nicest people I have ever worked with in more than 40 years in the news – one of the best. Not only was he a lovely man, charming and likeable, he was at the top of his game.

“The biggest stories, the tightest deadlines, he would be there, he never got agitated. The other thing I remember is his devotion to his family.”

And ex-YEP editor Nicola Furbisher posted on Twitter: “So shocked and saddened to hear of the sudden death of former [YEP] chief sub-editor Paul Woodhouse.

“A gentle, quiet man with a fierce intellect and a creative passion that went far beyond the newsroom. I learned a great deal from him. He will be so missed.”

A chorister at St Paul’s Cathedral in his youth, Paul was an accomplished saxophonist, flautist and singer, a founding member of Pinsuti, a choir, and had a lifelong passion for amateur dramatics, as a director, a composer and set designer at Ilkley Playhouse.

Paul, who died on Sunday, is survived by Geraldine, who recently retired as an English teacher from Ilkley Grammar School, as well as daughters Eleanor, 30, Alice, 27 and Felicity, 25.