A professional football captain has praised his local press and admitted regional sports journalists face a “tricky balancing act” when it comes to covering his club.

George Friend, who skippers Middlesbrough FC, has praised the Teesside Gazette and Northern Echo in an interview with the former, contrasting their coverage with that of national titles.

Speaking to Gazette journalist Anthony Vickers, the left-back opened up on his relationship with the press and acknowledged it was important for players to speak to reporters even “when things aren’t going well”.

He added the local press were “very good” at not confusing bad performances on the pitch with players lacking application. 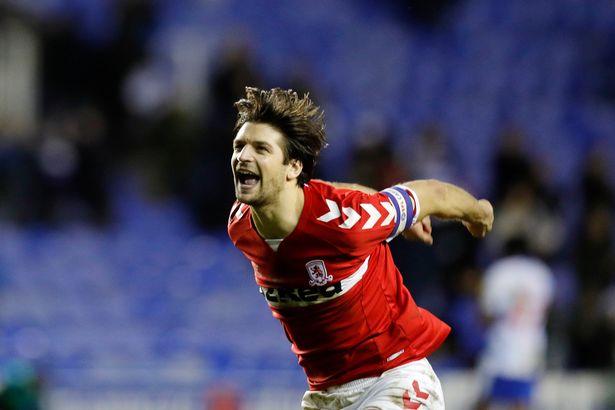 The 32-year-old, pictured, told Anthony: “They may criticise you for a bad performance but not often for a bad attitude, unless that really is questionable. And it is harder for the local press. They have to build up relationships with the players and their clubs to be able to operate.

“You see the national press so rarely. Even in the Premier League we weren’t seeing them too often. They can be as critical as they like because you may not see them again for months and it is forgotten by then.

“It is a different relationship with the local press because we see you all the time and talk to you quite often. As players, we all know the guys from the Gazette and the Northern Echo and Radio Tees.

“It must be harder for you guys as well because you don’t want to damage your relationship with the club and individual players so have to be a bit more nuanced in what you say but you also have to be honest and critical when it is deserved because that is what your readers expect and you face flak from them if you aren’t.

“That is a quite a tricky balancing act that maybe the nationals don’t have to worry about. But I appreciate the position you are all in and I think you manage it really well.”

Mr Friend graduated in 2015 with a degree in sports journalism after undertaking a distance learning course with Staffordshire University.

During his degree, he completed a work experience placement with the Darlington-based Echo, chosing it over the Middlesbrough-based Gazette because it was “far too close to home”.

Mr Friend has encouraged his fellow players to follow his example in order to “try and see it from the other side”, and also told Anthony of his love of print.

Mr Friend, who began his career at Exeter City, said: “The online side has changed that a bit I suppose but the Gazette still has a massive influence.

“I hope local papers never die. I really enjoy the feel of a paper and the experience of reading it. And I think an article in the paper carries more weight than online, definitely. It has more substance.

“I remember when I first broke through at Exeter and I was so proud to be in the Express and Echo, so proud to have made the paper and that they thought it was worth writing and reading about me.

“I would probably still be proud if I read that online now but you can’t cut it out and put it in a scrap book.”