A football manager has apologised to a newspaper reporter over an accurate story which he last year claimed was false.

Kilmarnock FC boss Steve Clarke said sorry to the Daily Record’s Craig Swan over the story run by the Glasgow-based daily on 27 April 2018, which claimed Rangers FC had approached him about becoming their manager.

At the time of Craig’s exclusive, Mr Clarke claimed “there was no offer” and added “it’s not really a story”.

However, he has now admitted the claims made by Craig were true. 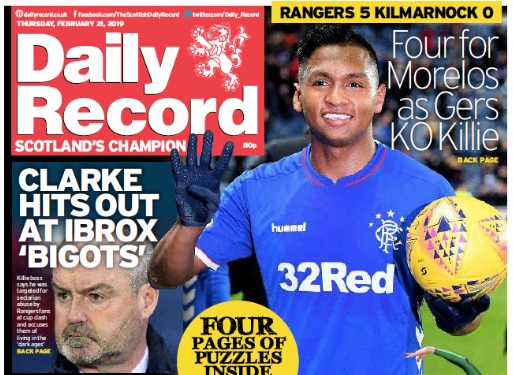 Steve Clarke, left, spoke out at a press conference

At a recent press conference, Mr Clarke, who was raised a Catholic, spoke out about sectarian abuse he had recently received from Rangers supporters, who have historically been associated with Protestantism.

He said: “When I mentioned the other night about Rangers’ approach – there was an approach from Rangers to speak and apologies to Craig [Swan] – it was one of the issues we discussed because, me being from the west coast [of Scotland], I sensed that would be one of the issues.

“They assured me they as a club had addressed it or were addressing it and it wasn’t an issue any more.

“But I think you see what happened to myself the other night it is still an issue.”