Ex-journalist proposes on stage at Elvis and Nirvana tribute gig

A former regional journalist proposed to her boyfriend in front of 2,000 people – with the help of the band they were watching.

Carly Squires got down on one knee to boyfriend Ross Graham on the stage at Bristol’s O2 Academy, where the pair were seeing Elvana.

The band, a tribute act to grunge band Nirvana fronted by an Elvis Presley impersonator, had been made aware of the surprise when the 31-year-old took her partner on stage.

Carly worked for Reach plc titles including the Plymouth Herald, Gloucestershire Live and Wales Online between 2015 and 2018. 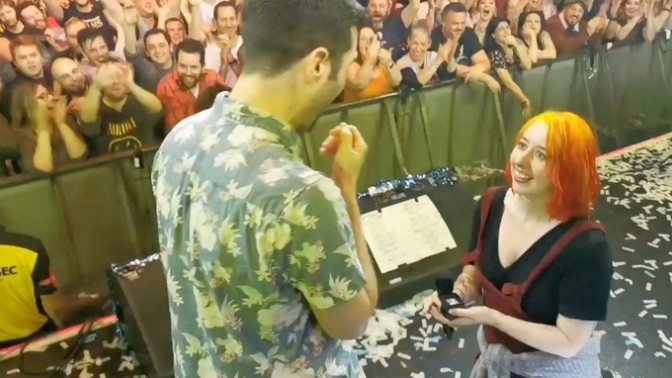 Carly proposes at the concert

She now works as an editor for Bristol-based magazine publisher Kennedy Publishing.

Carly told ITV: “I haven’t quite come back down to earth yet after Saturday night. The band and the crowd were so amazing in making it a truly special night.

“Funnily enough, public displays of affection make me really uncomfortable and so I wanted to fight this fear for my future husband.

“We both love live music and so the way I planned the proposal made complete sense.

“Additionally, as a woman I felt it was important for me to propose. It gave me more control and if we do have children one day, I’d love them to see that video and know that tradition isn’t always the way to go.”