Six regional dailies are set to introduce earlier deadlines – meaning they will no longer be able to cover late breaking news or evening sports matches in print.

JPIMedia has announced the proposed new deadlines at its daily titles in the North-East and North-West of England – the Hartlepool Mail, Shields Gazette, Sunderland Echo, Lancashire Post, Wigan Post and Blackpool daily The Gazette.

At present the six newspapers have last copy times of between 1am and 2am, but the new deadlines would be as early as 7.15pm in the cases of the Hartlepool Mail and the Wigan Post.

For Monday to Friday editions the Blackpool Gazette and Shields Gazette’s final deadlines would move to 7.45pm, the Sunderland Echo’s to 8.15pm, while the Lancashire Post’s would switch to 9pm. 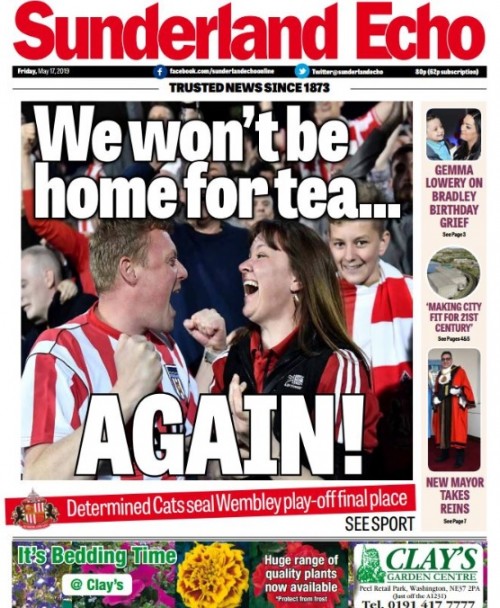 For Saturday editions, the Lancashire Post’s and the Echo’s last copy time would be 8pm on Friday evening.  The deadlines for the other titles would remain the same as their weekday editions.

The changes also affect weekly titles the Garstang Courier and Longridge News, whose deadline would move from midnight on Wednesday to 5pm on Tuesday, while the Fleetwood Weekly News would also move from the same time to 4.30pm on Tuesday.

Explaining the decision, a JPIMedia spokesman told HTFP: “JPIMedia is continually assessing opportunities to efficiently structure the distribution network of our titles. Our daily and weekly newspaper titles in the North-West, along with the daily titles in the North-East, are currently distributed direct to our retailers.

“The rest of the newspaper distribution in JPI Media is handled by the wholesaler network and we would like to bring the NW and NE in line with the rest of the company.

“We appreciate this decision will bring forward the print deadlines of these titles and impact our coverage of live, midweek sport. Sports fans will continue to have access to our continuously improving match reports and analysis via our digital platforms.

“We are committed to ensuring we can provide the best coverage of our teams online and in print and are investing in re-platforming our websites and apps in order to significantly improve our readers’ user experience.”

The announcement comes after JPIMedia last month revealed it was set to trial a newsroom restructure in the North-East which will see journalists move away from the print production process and concentrate on digital work.