A weekly editor has hit out at the Liberal Democrats for publishing a an election pamphlet with a similar name to the title she runs.

Katie French, who edits the Basingstoke Gazette, has criticised the Lib Dems over the party’s publication the Mid Hampshire Gazette, which has been produced in support of Paula Ferguson, its election candidate for Winchester.

The Mid Hampshire Gazette describes itself as a “free newspaper” covering several local districts, with the words “Liberal Democrats” appearing in very small print at the top right of the front page.

The distance between Basingstoke and Winchester is around 18 miles. 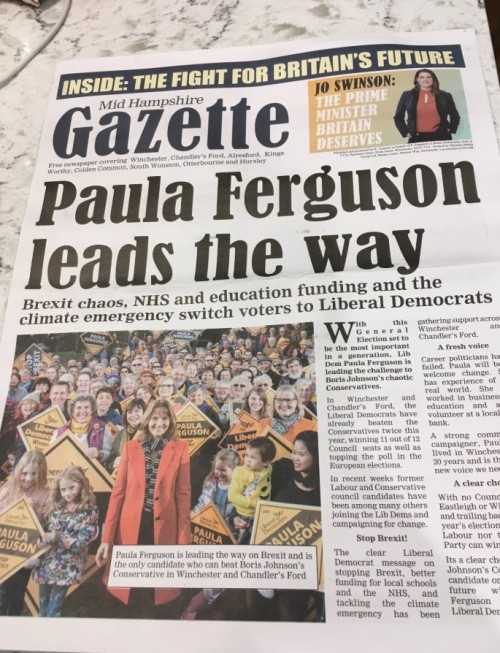 Katie told Channel 4 News: “It is deeply worrying that despite much debate about transparency and honesty, the Liberal Democrats here in Hampshire have shamelessly exploited the trusted format of a local newspaper for their own political gain.

“This is nothing more than a political advertisement dressed up as a newspaper. The look and feel of this advertisement is very convincing and readers will have to spot the small print in the top right corner to see the so-called Mid Hampshire Gazette is published by the Liberal Democrats.

“This is a flagrant attempt to manipulate voters by presenting them an advertisement in the form of a front page news story. Frankly it is insulting to the public who deserve better from one of the leading political parties.

“It is also offensive to local journalists, including my team, who work very hard to be the trusted and balanced voices in the community.

“As non-broadcast political adverts are largely exempt from regulation, we will be writing a letter of complaint to the Liberal Democrat party.”

The Lib Dems have defended the publication. A spokesman for the party told Channel 4: “Liberal Democrats pride ourselves on working hard locally all year round on the issues that matter to local people.

“During an election period this even more important and we are committed to informing people about the issues that matter to them.”

Last month HTFP reported how the Kentish Gazette had been forced to distance itself from a publication called the Canterbury and Whitstable Gazette, which had been produced by the Canterbury Constituency Conservative Association.