A weekly newspaper says it has been forced to distance itself from a new Conservative Party publication which bears a similar name to it.

Kentish Gazette editor Joe Walker was left “unimpressed” after the launch of the Canterbury and Whitstable Gazette, which is produced by the Canterbury Constituency Conservative Association.

The Tory publication has been posted to 10,000 homes across the constituency in support of the party’s parliamentary candidate Anna Firth.

The Kentish Gazette runs both Canterbury and Whitstable editions, the latter of which is called the Whitstable Gazette, although it has never had the name ‘Canterbury Gazette’ trademarked. 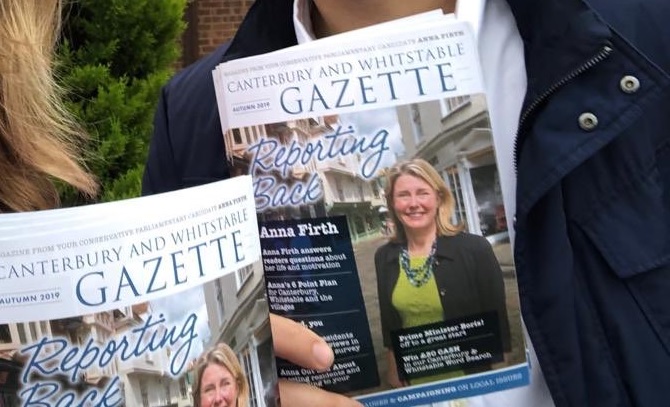 The new publication produced by the Conservative Party

In a story about the situation, the KM Group-owned weekly said it had been “forced to distance itself” from the Tory publication.

Editor Joe Walker said: “We are mystified as to how this was seen as a good idea.

“The Gazette has been published for more than 300 years. Its Canterbury and Whitstable editions are the only local papers serving the area, so we can only speculate why the Conservatives thought this was the best name for their magazine, given the huge number of alternative options available.

“We are strictly apolitical and unimpressed that we have had to take action to publicly reiterate our independence and impartiality.”

HTFP understands the Kentish Gazette plans to take no further action over the issue at this stage.

Mrs Firth told the paper: “I was working on content for the magazine in August but wasn’t consulted over or involved in what it would be called and didn’t see it until I got a proof copy.

“Even then I didn’t see a link it to the Kentish Gazette because it’s just a little magazine with a different livery and so different in style. I genuinely did not think that people would associate it with the newspaper and it wasn’t raised as an issue.”

She added: “If I had even one person say ‘oh, this is a bit off’, I would think that maybe it was a mistake.

“It was absolutely not my intention to try and mimic the newspaper or confuse or mislead voters.”