A regional daily editor has accused The Sun over “heaping shame” on journalism over the tabloid’s decision to publish a story about the death of cricketer Ben Stokes’s half-siblings.

The England vice-captain publicly hit out at the national newspaper this morning after it splashed on a story about the shooting of his half-brother and half-sister in New Zealand more than 30 years ago, describing it as “low and despicable behaviour, disguised as journalism.”

Mr Stokes, 28, has won widespread support for his response to the story – with Yorkshire Post editor James Mitchinson among those to publicly back him.

James, who is also currently serving as interim editor of JPIMedia sister daily the Yorkshire Evening Post, criticised The Sun for publishing the story in a post on Twitter. 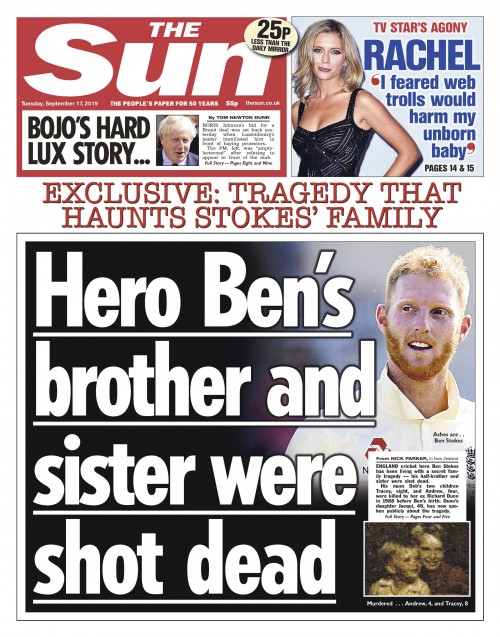 Quoting the World Cup winner’s statement, he wrote: “It is decisions like these by editors unlike me that heap shame upon our profession. It kills the trust we work so hard to build.

“It gives every journalist a bad name and legitimises those who seek to discredit the Fourth Estate. I am sorry you have been treated this way, Ben.”

In an editorial published in the Post, James added: “How am I, as an editor, meant to look regulators, ministerial policy makers and most importantly the public in the eye and reassure them they can trust me and my teams to do the right thing when it comes to publishing good, honest, fact-checked journalism that is undertaken without malice and with the kind of care and common decency that right-minded people expect?

“How can we as an industry really say ‘everything has changed’ post-Leveson when it is as plain as the nose on my face that – in certain crevices of the Fourth Estate – the rot remains festering.

“The short answer is; we can’t. Until every journalist, editor and publisher commits to guiding their work with the same editorial principles and standards, we will not – and quite understandably – win the trust of anyone.

In a subsequent tweet he added:  “Way to treat a national sporting hero, folks. Well done.

Speaking to HTFP, Kevin added: “When I saw the story at about 6am this morning, it struck me as a both a poor piece of journalism and a dreadful editorial judgement.

“I can’t see any public interest in running a 30-year-old story. The public backlash on social media has been considerable and this could be another Hillsborough situation for The Sun.

“Today takes us back to the bad old pre-Leveson days. When I was a regional daily editor, I would have spoken out about this story because it tarnishes the industry as a whole. Hopefully those now in editor’s chairs around the UK will do the same.”

Mr Stokes, who was born in New Zealand but moved to England as a child, said in his statement: “Today The Sun has seen fit to publish extremely painful, sensitive and personal details concerning events in the private lives of my family, going back more than 31 years.

“It is hard to find words that adequately describe such low and despicable behaviour, disguised as journalism. I cannot conceive of anything more immoral, heartless or contemptuous to the feelings and circumstances of my family.”

He added: “To use my name as an excuse to shatter the privacy and private lives of – in particular – my parents is utterly disgusting. I am aware that my public profile brings with it consequences for me that I accept entirely. But I will not allow my public profile to be used as an excuse to invade the rights of my parents, my wife, my children or other family members.

“They are entitled to a private life of their own. The decision to publish these details has grave and lifelong consequences for my mum in particular.”

The Sun has defended its story.

A spokesperson said: “The Sun has the utmost sympathy for Ben Stokes and his mother but it is only right to point out the story was told with the co-operation of a family member who supplied details, provided photographs and posed for pictures. The tragedy is also a matter of public record and was the subject of extensive front page publicity in New Zealand at the time.

“The Sun has huge admiration for Ben Stokes and we were delighted to celebrate his sporting heroics this summer. He was contacted prior to publication and at no stage did he or his representatives ask us not to publish the story.”