Dyson at Large: Regional heroes standing up to political stupidity and extremism

As Boris Johnson begins his new tenure as Prime Minister, this column applauds the many regional journalists who have stood up to his inane behaviour.

One of the best examples is David Parker of the Rotherham Advertiser, the first of my five regional heroes of 2019, who rattled the premier over his infamous “spaffed up the wall” comments about historic child abuse.

David poleaxed Boris at the Convention of the North conference in Rotherham in September when he asked: “A few months ago, you said … local police forces were spaffing money up the wall on investigations into historic CSE. Do you still believe they are?”

Boris denied that he’d ever said such a thing, leading to multiple media outlets reminding him that he definitely had by playing footage of him saying that £60 million “had been spaffed up the wall on some investigation into historic child abuse”.

The point here is that national political leaders sometimes think the regional press is an easy media to hoodwink. It was fantastic to see them having to think again, thanks to David’s incisive questioning.

Another regional hero who made huge political waves was Yorkshire Evening Post reporter Dan Sheridan who revealed how a four-year-old was sleeping on the floor of Leeds General Infirmary with suspected pneumonia, due to bed shortages.

This story was swiftly followed up by all the nationals and dominated general election coverage for 24-hours, with a panicked Boris Johnson grabbing a TV reporter’s phone after being asked about the issue.

Dan then calmly debunked fatuous Tory rumours that his story was false by calmly explaining the facts behind his exclusive. 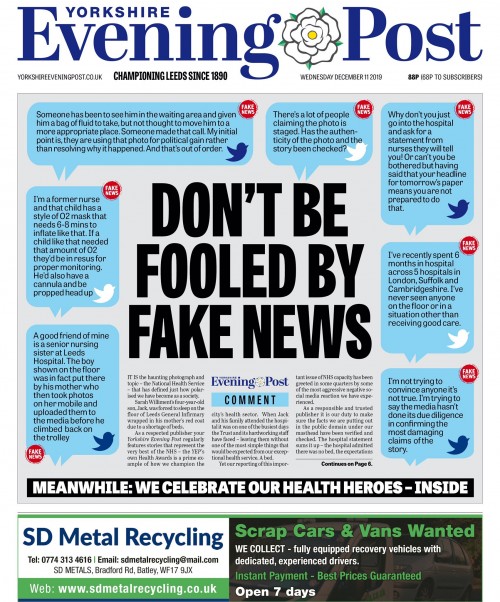 The YEP front page comment debunking social media claims that its picture of a four-year-old boy sleeping on a hospital floor was faked.

Meanwhile, in the increasingly extreme political arena that journalists have had to cover this year, another regional hero was Susie Beever.

This was the brave journalist who refused to be put off covering far-right protests back in January after receiving a threat that she would “pay the ultimate price” if she continued.

Susie, who now works for the Yorkshire Post and Evening Post, was working for the Huddersfield Daily Examiner and Leeds Live when she received the threat after reporting on a rally in Leeds.

She said: “When it comes to protesters flying white nationalist flags, intimidating city centre shoppers on a Saturday afternoon and assaulting police officers, it’s little wonder the local media aren’t cheering them on.”

Paul had been forced to regularly turn off comments for his online stories about minority groups due to “racist, xenophobic and Islamophobic rants” by readers.

In a principled editorial for the Star, he aimed his ire directly at readers and wrote: “If you are prepared to condemn an entire nationality/ethnicity/or community because of the actions of some of their members, then you are – by definition – a racist.”

Extremism comes dressed up in many different ways, of course, and the fifth journalist deserving of a regional hero award for resolutely calling it out is Jayne Haynes of the Birmingham Mail.

Jayne has been a constant local media observer of the ugly protests by some parents and campaigners against a Birmingham school over its equality lessons using picture books about a child with two mummies or daddies.

Despite being targeted with abuse from protesters, Jayne wrote an impressive and moving personal comment piece about how her own son came out as gay, and argued that unacceptable homophobia was at heart of the school row.

She said: “We owe it to all our kids, of all colours, creeds, religions and sexual orientations, to support equality teaching, to back the [school] leaders … If not we risk retreating 30 years, driven back by fear.”

The above five heroes should be proud of showing how regional journalists are among the best at standing up to both political stupidity and extremism.

They rightly dominate this year’s regional heroes list because the industry needs to be even braver at using its local knowledge and influence to help heal the nation’s divisions in 2020.