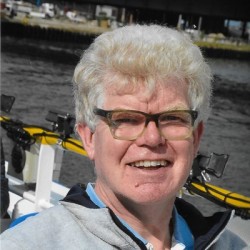 A regional journalist has shared his despair at having to consistently turn off comments for stories he has published online due to “racist, xenophobic and Islamophobic rants” by readers.

Paul Geater, political writer for the East Anglian Daily Times and Ipswich Star, has hit out at “keyboard warriors” whose actions have increasingly seen the Archant-owned titles disable the comments feature on stories.

Last year the Bradford Telegraph & Argus announced it was permanently disabling the comments feature on its website after claiming extremists were using it to “sow the seeds of division”.

Paul, pictured, who has worked as a journalist for 37 years, attacked the commenters in an editorial piece for the Star.

He wrote: “One of the benefits of the rise of online news pages was supposed to be that it “democratised” the news. It gave everyone the chance to have their say underneath a news or comment piece. That’s a great aim – and it’s something that would be really valuable in provoking debates on public matters.

“Unfortunately, however, it’s an aim that is necessarily becoming impossible to achieve – and if you scroll down to the bottom of this article you’ll see that comments are disabled. Sadly the fact is that these comment boxes have become a repository for racist, xenophobic and Islamophobic rants – not to mention material that is personally insulting to individuals.

“I know these come from a tiny minority of readers and I personally have lost count of the number of times people have commented to me on the street about their disgust at some of the posts that have appeared on our stories. As a result more and more of our articles are having to be published with comments disabled. I know there are a tiny minority of people who will read them and feel they want to write unpleasant comments underneath.

“Well they can go off and do that elsewhere. I don’t want those kind of comments associated with a news organisation I’ve been proud to work for over the past four decades. And by the way, if you are prepared to condemn an entire nationality/ethnicity/or community because of the actions of some of their members, then you are – by definition – a racist.”

Paul went on to cite a “rant” about the creation of a prayer room in a Kurdish community centre as an example.

In his piece, for which comments have also been disabled, Paul added: “As an aside, I do wonder how many people worried about a Kurdish community centre in Ipswich are aware that in Syria and Iraq it is the Kurdish people who are the allies of western troops in the battle against President Assad and IS.

“What is a real shame is, that like it used to be at school, it is the actions of a small number of people who spoil things for everyone else.

“I’d like to think that the keyboard warriors will one day just log off and go back to grumbling into their pint or cup of tea – but I fear we’re a long way from that point at the moment.”