Way back in the late 1990s, when an emerging internet was making its first impact on regional newspapers, journalists up and down the country were considering how to work with it.

What was then the Birmingham Evening Mail was owned by Mirror Group, soon to become Trinity Mirror, and a series of meetings was held by pioneering online enthusiast Stuart McGann, a smashing chap who later sadly passed away at the far-too-early age of 45.

The digital reach was weak back then, with no broadband or phone browsers and anyone ‘surfing’ at home still faced minutes if not hours of buzzing phone connections on cardboard box-sized computers while each page painfully downloaded.

But Stuart persevered with us doubting print hacks, convincing us that we needed to react to the internet and make it part of our operations, or else it would soon consume us.

After much discussion, it was agreed the group’s fledgling regional websites (an early url was icbirmingham.co.uk at the Mail) would be given short summaries of the main stories twice or three times a day, hopefully driving anyone interested to go out and buy the actual newspapers.

Stuart wanted much more, and he was probably right, but at the time that was the agreed decision, approved by those upstairs, and a formative relationship with the internet commenced.

So much has changed since then, but that slice of history was brought back to my mind recently when I interviewed Richard Butt, an old classmate from NCTJ preliminary diploma days at Preston, who since 2008 has been editor at Isle of Man Newspapers.

The full interview will appear in InPublishing later this month, but here’s just a snippet from Richard on how the Isle of Man Examiner, Manx Independent and Isle of Man Courier newspapers currently treat their stories online at iomtoday.co.im. 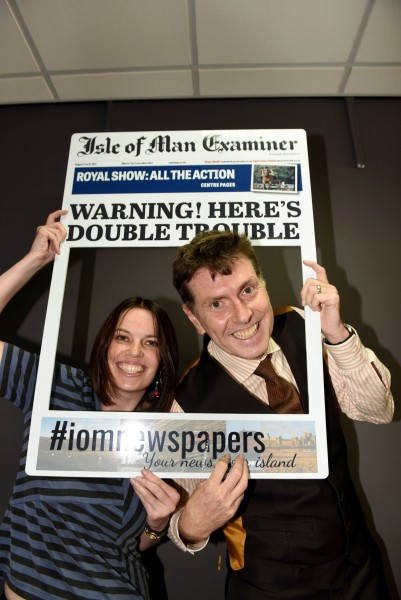 Richard told me: “My strategy has been to put stories on iomtoday.co.im if they’re out there already but to give our exclusive content room to ‘breathe’ in the papers for a day or two before uploading it online. And some print content never goes online.”

This isn’t much different to how our initial thinking had developed by the mid to late-2000s when I edited the Birmingham Mail and the company was busy trying to converge its digital and print mediums.

“If it’s a front page exclusive, hold it back from online,” was editorial’s attempted policy. “Get the story or issue talked about in other media but don’t give everything away until the paper’s had chance to sell some copies.”

Why? Because the powers-that-be had by then decided against any kind of paywalls, and we couldn’t see why you’d give your content away for nothing online when people were still prepared to pay for it in print.

Some called us dinosaurs, of course, and shortly after I left the Mail in 2010 digital evangelists were worshipping what’s since become almost universally accepted as ‘online first’.

As a result, the vast majority of the regional media today publish all their stories on a title’s website and social media as soon as possible, with ink-on-paper versions at best waiting until the next day, if not days or a week later.

This approach was like a digital emperor wearing gleaming new clothes of internet revenues that turned out to be pretty see-through, and it caused needless extra damage to the sector’s already declining print products.

That said, an alternative view is that editors like me were backward-minded Luddites, opposed to new technology and modern ways of working, and possibly partly responsible for preventing more speedy online progress.

The rights and wrongs of the above approaches and philosophies will never be fully resolved among those who have such different perspectives.

But with vastly shrunken revenues facing today’s regional media, many who once dismissed online audiences ever having to pay for content have now decided that paywalls may, after all, possibly be the only way the industry can survive.

This last-ditch U-turn that’s now spreading seems to be saying: “If it’s your own and worth selling, make the online reader pay for access through a paywall.” Ring any bells?

It’s surely a version of the more sensible print or online decision-making process that the Isle of Man Newspapers – owned by Tindle since 2016, by the way – has been carrying out for years.

For anyone interested, the Examiner and the Independent on the Isle of Man are still respectively selling around 7,000 and 6,800 copies a week and are only declining by around 3pc year-on-year, statistics many papers would die for.

This is not meant to be overly critical of those who’ve grappled with the digital challenges of regional publishing … someone had to do something, and they weren’t to know that not enough advertising revenues would transfer.

Nor is it saying that the policies of 1998 alone could have saved the day. And it’s certainly not under appreciating the huge strides made in digital story-telling and audience reach.

But how ironic to watch the industry making a full circle by starting to hold back from giving all stories away for nothing, meaning readers have to buy them, albeit from behind paywalls rather than just in print.

• My full interview with Richard Butt appears in the November/December edition of InPublishing magazine due out in print later this month, then published online a few days after at www.inpublishing.co.uk.