A regional daily has used innovative print technology to stage a front page competition which has seen readers win hundreds of pounds.

Over the past week, the Aberdeen-based Press & Journal has published the names of hundreds of towns and villages across its patch on the front page of individual copies using publisher DC Thomson’s print system, which allows for the creation of bespoke editions of newspapers.

Readers have then registered the place name found on their copy of the paper and a unique code found inside, with two winning place names being announced in the following day’s edition.

Two readers whose place name and unique codes match have then won £250, with the Press & Journal giving away a total of £3,000 in cash over the course of this week. 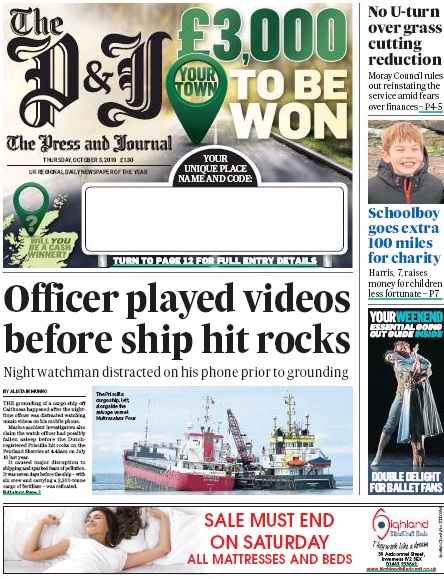 Two long-serving readers, Sylvia Baron and Morag Delaney, were the first winners announced after receiving copies bearing the names of Beauly, in the Highlands, and Ellon, in Aberdeenshire, on Monday.

Mrs Barron,64, told the P&J: “My husband Alastair put my name into the competition, so it was quite the surprise when I received the phone call.

“He and I have been getting the paper delivered to our door every day since we were married back in 1975.”

Mrs Delaney, 67, has read the P&J for 43 years. She said: “Who wouldn’t want a phone call like that. It was a very pleasant surprise.”

DC Thomson’s system was introduced in 2015 by its printing arm Discovery Print.

The innovation means it is possible to change what is to be printed without swapping plates on the press and will allow for more targeted campaigns for advertisers.