A regional daily has vowed to “put an end to loneliness” after a survey found more than half the people on its patch felt lonley.

The Yorkshire Evening Post marked the start of Loneliness Awareness Week on Monday by splashing on its backing for a national campaign aimed at ending the problem.

Let’s Talk Loneliness brings together charities, organisations and businesses including the Marmalade Trust, the Co-op Foundation, the British Red Cross, the Campaign to End Loneliness, Mind, Public Health England and the Jo Cox Foundation to help people talk about their feelings.

The YEP’s fellow Leeds-based sister daily the Yorkshire Post has conducted a long-running campaign aimed at tackling loneliness across the county. 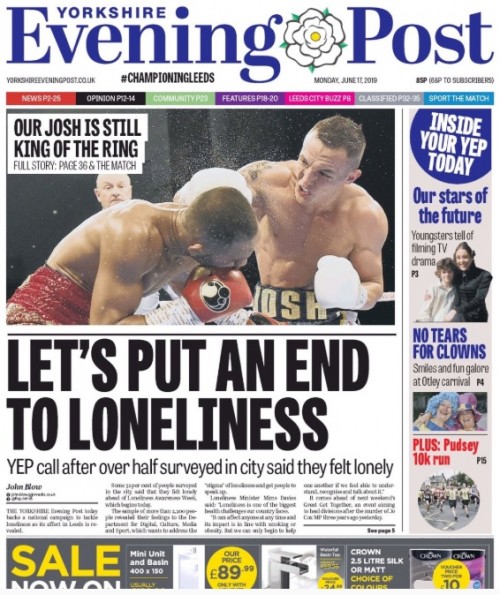 In a piece published on Monday, YEP editor Hannah Thaxter wrote: “Loneliness is a modern-day plague, which is silently and stealthily destroying lives across our country. The late Batley and Spen MP Jo Cox, set up a commission for loneliness before she was murdered, three years ago yesterday.

“Leeds West MP Rachel Reeves, took up the baton when she led a Parliamentary group to look at loneliness. Today marks the start of Loneliness Awareness Week, with a campaign being launched by Loneliness Minister Mims Davies which aims to encourage people to speak out.

“Let’s Talk Loneliness is the name of the movement which brings together a host of charities and organisations – including the Jo Cox Foundation – to help and encourage people to talk about their feelings and seek help to stop loneliness.

“Loneliness, and the effects it has on people’s lives, needs to be recognised. Whilst the Leeds survey was small in number – just over 2,000 people answered questions in a new YouGov poll, just over half reported feeling lonely.

“Loneliness does not discriminate – age, sex or background is no barrier to feeling lonely – although children living in poverty are twice as likely to be lonely and it seems younger people are more likely to say they have felt lonely than those over 55. There are things we can do to tackle this, and we owe it to Jo to do just that.”