A regional daily has challenged a football club owner to answer 10 questions published on its front page amid a “real danger” the side could be liquidated.

The Nottingham Post has demanded Notts County owner Alan Hardy answers questions over the potential sale of the club, as well as other unanswered points about the state of its finances.

County, the world’s oldest professional football club, has been up for sale since January.

The club was relegated from the Football League for the first time in its history in May, and last week staff and players were not paid their salaries. 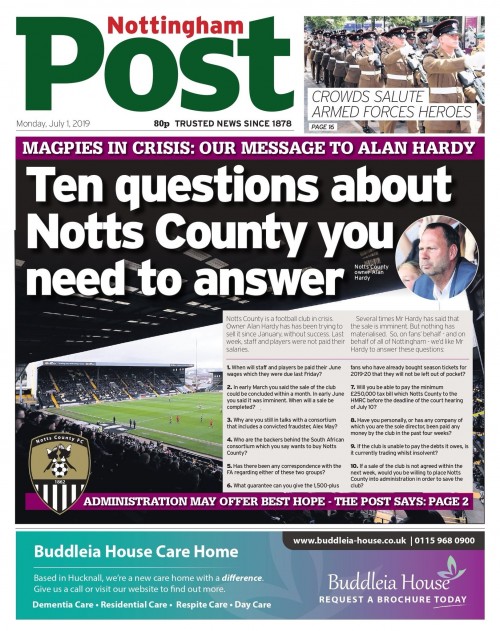 On yesterday’s front page, pictured, the Post urged Mr Hardy to answer its question “on fans’ behalf – and on behalf of all of Nottingham”.

Mike Sassi, editor of the Post and its Nottinghamshire Live sister website, said: “There is a real danger that Notts County – the world’s oldest professional football club – could go into liquidation. The club has huge debts.

“Last week it was unable to pay its players and other staff. Any responsible business owner would have done the decent thing by now and put the club into administration to give it a degree of protection.

“However Alan Hardy continues to carry on negotiations with would-be buyers that are patently going nowhere. His behaviour is nothing short of disgraceful.”

When approached for a comment, Notts County directed HTFP to a statement issued by Mr Hardy here.