A regional daily has stepped up its campaign to get answers for readers over the financial crisis concerning a football club on its patch.

HTFP reported earlier this month how the Nottingham Post had called on Notts County owner Alan Hardy to answer 10 questions related to the club’s current state which were published on its front page.

An unpaid tax bill of at least £250,000 needs to be settled if County are to avoid liquidation when they return to the High Court next week.

On Saturday, the Post splashed on the “wall of silence” it has received from football’s governing bodies since its campaign began. 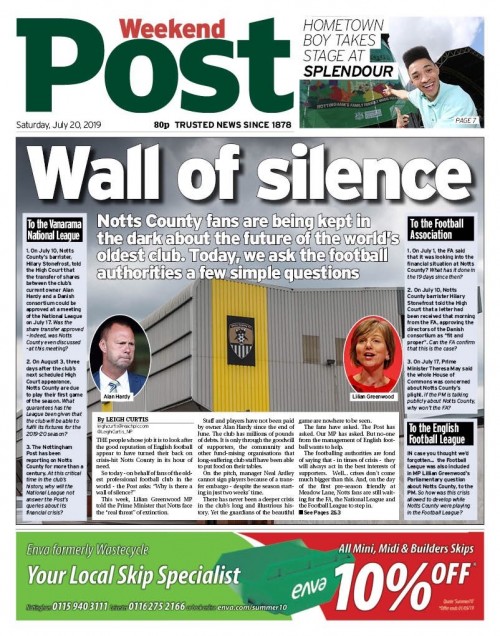 The newspaper published a list of questions it wants answering by the Football Association, as well as the English Football League, from which Count were relegated in May, and the Vanarama National League, which they are due to play in this coming season.

An accompanying editorial penned by the Post’s Notts County editor Leigh Curtis reads: “The people whose job it is to look after the good reputation of English football appear to have turned their back on crisis-hit Notts County in its hour of need.

“So today – on behalf of fans of the oldest professional football club in the world – the Post asks: ‘Why is there a wall of silence?'”

He added: “The fans have asked. The Post has asked. Our MP has asked. But no-one from the management of English football wants to help. The footballing authorities are fond of saying that – in times of crisis – they will always act in the best interests of supporters.

“Well… crises don’t come much bigger than this. And, on the day of the first pre-season friendly at Meadow Lane, Notts fans are still waiting for the FA, the National League and the Football League to step in.”

Mike Sassi, editor of the Post and its Nottinghamshire Live sister website, told HTFP: “Notts County has been a shambles of a football club for months and no-one is holding the owner to account. The club is due to face a winding-up order in the High Court for the third time next week. Players and staff remain unpaid. The team have even had to play pre-season friendlies in last season’s shirts.

“Fans are rightly concerned – yet the silence from the National League, the Football Association and the Football League is deafening.

“Our Notts County correspondent Leigh Curtis has produced a string of exclusive stories highlighting issues that need to be investigated by the football authorities. But all three organisations have refused to publicly get involved.

“They’re letting the club wither away – and they should hang their heads in shame.”