A regional daily journalist who has been left blind in one eye for more than a year has spoken out about his fight to regain full vision.

Shropshire Star reporter Nick Humphreys has called for contact lens makers to issue clearer warnings on their products after accidentally showering while wearing the devices.

Nick, pictured below, first noticed a problem in January 2018 when he began experiencing dryness in his right eye and after several tests he was diagnosed with Acanthamoeba keratitis, an infection of the cornea which is caused by a microscopic organism found in water.

In March of the same year he completely lost vision in the same eye, and the bug subsequently rendered him “pretty much housebound” for six months before he underwent two operations which left him seeing “a monster looking back at me in the mirror.” 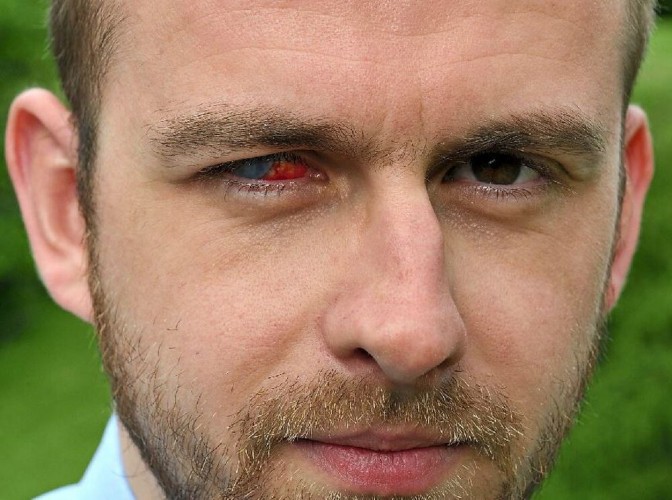 In a piece about his ordeal for the Star, Nick wrote: “Depression and anxiety have been a problem since, but fortunately it has healed to a point where, with glasses on, it’s not too noticeable to others.

“Blindness will remain until I have a full corneal transplant on August 15, which will also include cateract surgery. I will owe a monumental debt of gratitude to my donor.”

Nick is now working with the charity Fight for Sight to raise awareness about the danger of using contact lenses while showering or swimming, which he says has “helped” with his recovery.

He added: “I can honestly say if I’d had the slightest idea that this was even a remote possibility I would never have worn contacts in the first place. It’s crucial that people out there know this is a reality and can happen because of something as simple as showering.

“If I get my sight back I’ll never wear contacts again and, if I’m lucky enough to take to football pitch again, I’ll be donning the goggles like the ex-Holland midfielder Edgar Davids.

“I’ve lost 18 months of my life because of something as simple as showering with contacts in. Now contact lens makers need to put sufficient warnings on packaging to stop this preventable condition destroying more lives.”