Around 3,000 archive regional daily photographs dating back to the 1960s have been made available free to the public online.

Wolverhampton daily the Express & Star has uploaded the images as part of a project which eventually aims to preserve its entire 140-year-old archive in digital form.

The project was set up back in 2008 by the Express & Star, along with the University of Wolverhampton and Wolverhampton City Archives, to ensure photos taken throughout the 20th Century were made available to the public via an online platform.

Development funding of £59,800 was initially awarded to the partnership in 2014, and since then archiving work has been carried out by a group of volunteers, followed by the digitisation of part of the collection and the development of the website. 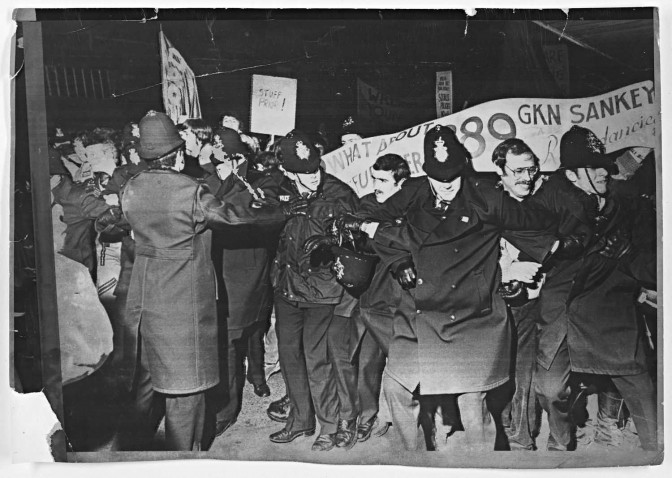 One of the photos from 1981, showing police battling to hold back 500 angry protestors when Employment Minister Jim Prior visited job-starved Telford

The first images to be published on the website include photos from the 1960s taken at steel industry operations across the Black Country, images from the final years of mining and pictures of workers for brands with local heritage including Cadbury’s and Chubb.

Express & Star editor Martin Wright said: “We are delighted that the first photos have been brought back to life for local people to revisit their shared history, all on a website made available for free.

“We are grateful to the National Lottery Heritage Fund for supporting our partnership with the University of Wolverhampton, Wolverhampton City Archives and local community groups.

“Some printed images are deteriorating over time so the preservation work is vital. Thank you to all of the readers and members of the public who supported the project during the painstaking work needed to preserve the photographs.”

He said: “On behalf of everyone who worked on the project, I would like to thank all our partners and supporters for their combined efforts in preserving these photos for future generations. We are especially grateful to our volunteers, who gave a combined total of 260 days of goodwill time to help organise the physical archive ready for its transition to digital.”

Work will now begin on securing funding to preserve other historic photos, including local and mostly unseen images of World War II, as well as landmarks and places.

The collection includes wartime images which were not published due to government censorship and a photograph of American civil rights activist Malcolm X visiting Smethwick in 1965, nine days before he was assassinated.

Following digitisation, the original images have been transferred to Wolverhampton City Archives where they will be preserved for future generations.