A regional daily is calling on government chiefs to halt funding cutbacks to sport amid an “obesity crisis” on its patch.

The Edinburgh Evening News has launched its Sports Chance campaign, which comes after an exclusive investigation by the newspaper found a £14m shortfall in council funding for sport.

The EEN is urging the Scottish Government, Sport Scotland, the Scottish Football Association, NHS Lothian and others to help bring the issue of youth sport in Edinburgh to the fore.

The paper splashed on the campaign’s launch on Thursday, and around 1,500 people had signed a petition set up in support of the appeal by Friday afternoon. 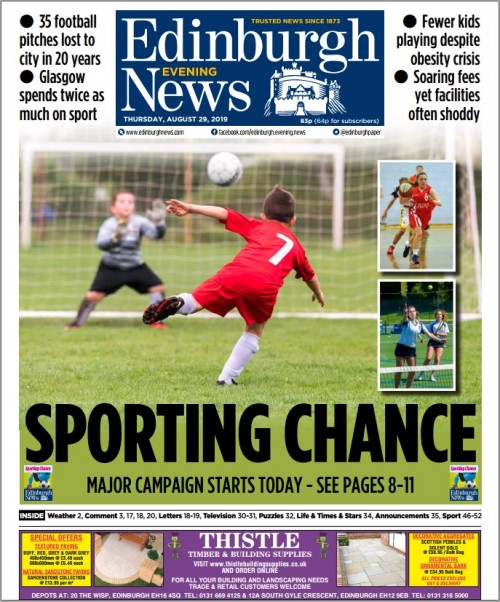 Editor Euan McGrory said: “We are in the middle of an obesity crisis and every parent is desperate to do everything they can to encourage their kids to take up a healthy lifestyle.

“Yet week after week our readers are taking their children to their local pitches to play football and finding them unplayable. Some of the pictures they have sent us look more like a scene from a Constable painting than a football pitch, there are so many piles of grass left on the playing surface. Other pitches are badly pitted or poorly marked and there is a yawning chasm between the state of the best and worst changing facilities.

“Perhaps worst of all, many of the thousands of parents who volunteer their time to coach kids often feel that they are obstructed rather helped to do that, and often finds doors quite literally locked on them.

“The local council is short of cash after years of cost-cutting and struggling to meet the demands on it for social care, schools, bin collections, and so on. No one thinks it is easy for them, but there is a strong feeling that sport has been allowed to fall too far down their agenda, especially in a city where the arts, business and politics loom large in local life.

“We are hoping that not only will the local authority listen to the concerns of our readers, but other organisations – the Scottish Government, Sport Scotland, the Scottish Football Association, NHS Lothian and others – will see an issue here that they can help with.”