A regional daily was justified in describing a man as a “fanatic” with a “warped mind”, the press watchdog has ruled.

The North Wales Daily Post had covered Llifon Huw Jones being made the subject of a hospital order after being convicted for attempting to build a submachine gun at his home, reporting on a series of online posts he had made “outlining dozens of conspiracy theories.”

The Post said the posts gave an insight into Mr Jones’s “warped mind”, while the story’s sub-headline described him as “a fanatic who terrified his neighbours so much they put a steel door on their bedroom.”

These descriptions prompted Mr Jones to complain to the Independent Press Standards Organisation, claiming that referring to his mind as “warped” was an unacceptable and unethical way to describe an individual with a mental health condition. 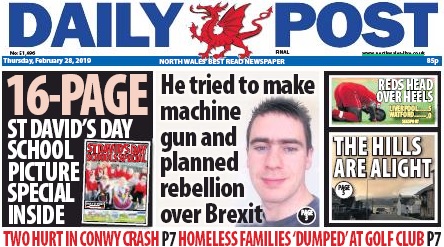 The Post apologised to Mr Jones for the offence it had caused him, but denied it had breached the Editors’ Code of Practice by using the terms.

IPSO backed the Post and found that the newspaper’s use of both the terms “warped” and “fanatic” were valid within the context of the story.

Complaining under Clause 1 (Accuracy) and Clause 12 (Discrimination) of the Editors’ Code, Mr Jones claimed the article featured multiple examples of discriminatory language in reference to his mental illness, for which he was receiving treatment.

He added the tone of the article was disrespectful in light of his illness, and the fact that he had seen active service for his country, believing the fact the Post had referenced posts he made on social media at a time he was ill was an attempt to mock and discriminate against him based on his illness.

The Colwyn Bay-based Post apologised for the offence caused by the story’s publication, and noted it has also had its offer to print a public apology rejected, but denied it represented a breach of the Code on the grounds that Mr Jones’s mental health was relevant to the story, the court case and his sentence.

It said the term “fanatic” was used in reference to his strong interests in unusual topics reflected in his social media posts, and did not represent pejorative references to the complainant’s mental health, adding the term “warped” is widely used editorially to describe a view or outlook which is different.

IPSO considered that the term “fanatic” was employed by the publication to describe Mr Jones in light of the beliefs which his social media posts suggested he held, rather than because of the state of his mental health.

Similarly the reference to his mind as “warped” was linked to, and made in respect of, the beliefs he held which it had been alleged in court had motivated his actions and which provided the context in which the offences for which he had been convicted had been committed.