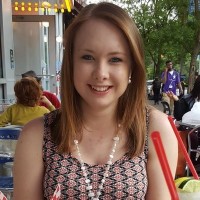 Council chiefs have apologised after barring a local democracy reporter from a meeting about homelessness on her patch.

Catherine Hunter, who works for the Glasgow Evening Times under the BBC-funded scheme, was turned away from the public meeting about plans to cut homelessness in the city.

Glasgow City Integration Joint Board was scheduled to discuss the development of the rapid rehousing transition plan – a national objective to eradicate homelessness within five years.

During the meeting a protest from the Scottish Tenants Association was scheduled to take place, and Catherine, pictured, was told she could not enter because “she was technically with the protest group” – even though she wasn’t.

According to the Evening Times, the four protesters were then allowed to access to the meeting room before Catherine was asked to leave the building.

The board is a body responsible for community health and social care services as part of a partnership between Glasgow City Council and NHS Greater Glasgow and Clyde.

Colin Edgar, head of communications at Glasgow City Council, subsequently apologised for the incident, which happened on 18 September.

He told the Evening Times: “This should not have happened and I am very sorry that it did.

“Of course our meeting are open to press and public, except in very limited circumstances, and that will always be the case.”

It is the second time in under a year that the newspaper has experienced access issues at a meeting of the city council.

HTFP reported in December last year how Inspector Craig Walker, of Police Scotland, had declined to present crime statistics to councillors at a meeting after the clerk made him aware that former Evening Times local democracy reporter Eddie Harbinson was covering proceedings.

The meeting was temporarily halted and members were then told they would only be given the full breakdown of statistics for the north Glasgow areas in private, with the authority defending the decision on the grounds that it was “extremely rare” for press or other members of the public to attend certain meetings.

Henry Ainslie, deputy editor at the Evening Times, told HTFP: “Full and free access for reporters to public council meetings is vital to the function and accountability of local democracy, and blocking our reporter from the meeting went directly against that.

“We knew immediately the council had no authority to bar Catherine from the meeting, and raised it with management at the council communications team.

“We received a full apology from the authority and an assurance it would not happen again.”