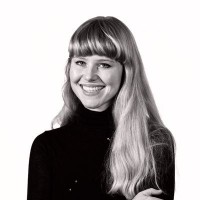 A police manhunt is on to find a tram user who subjected a local democracy reporter to a sustained sexual harassment ordeal.

Charlotte Green, left, who works for the Manchester Evening News under the BBC-funded scheme, suffered the 15-minute attack at the hands of a man who abused her with “vile comments” and simulated having sex with her during the journey.

Charlotte, 26, who covers Tameside and Oldham councils in her role, managed to capture video of the suspect, and an edited version of the footage has now been shared on the MEN’s website.

The man had initially complimented Charlotte’s shoes and hair when he got on the tram at Failsworth, Oldham, before he asked for her phone number.

However, after she repeatedly made clear she was not interested, the man came close towards her, made sexual gestures towards her as well as vile comments – most of which the MEN said were “too explicit to publish”.

Charlotte has since reported the incident to police and Transport for Greater Manchester, who have advised passengers to press the emergency call button to connect to the tram driver during such incidents.

She told the MEN: “He got on between 8pm to 8.05pm at Failsworth. He was saying he liked my hair and shoes, and I said thanks. And then he said ‘Could I have your number?’

“I said I am not interested I don’t want to give you my number. He made sexual gestures with his hands. And then he would start pestering me for my number. He stood in front of the barrier pretending to have sex with me.

“He said ‘If I was your man I would be pulling your hair all of the time’. Another passenger got on at Victoria and said do you want to move down the tram. I said I was fine, I don’t want to stand up because I thought he would touch me.”

The man alighted at Exchange Square, in Manchester, 15 minutes after Charlotte had boarded the tram. 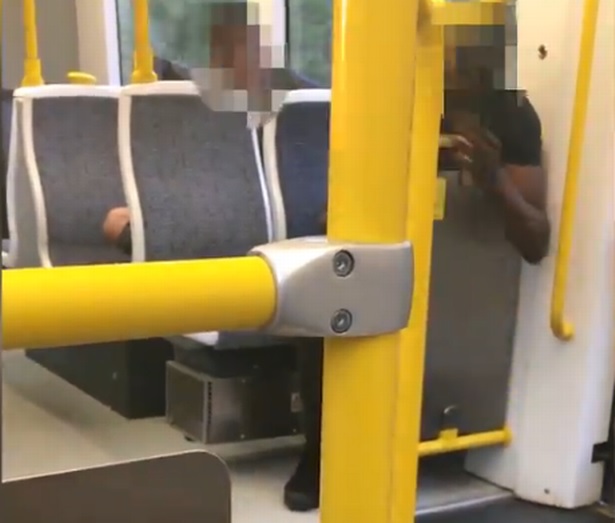 A still from the footage shared by the MEN

Charlotte added: “To press the driver intercom, it isn’t really realistic, it would have only made it worse or I would be relying on strangers to do it for me. It is like all of the pressure is put on yourself to protect yourself. They did have the travel safe officers, but I haven’t seem them for weeks. This is the most serious incident, in a ream of incidents, I have seen on the tram recently.

“It has made me think of travelling to and from work as a really unpleasant experience. I can see why people choose not to take the tram because it doesn’t make you feel safe.”

Greater Manchester Police has confirmed to the MEN that the incident was reported and it has launched an investigation into the man, who is described as black, over 6ft tall and aged in his 30s.

Danny Vaughan, TfGM’s head of Metrolink, said: “It’s extremely important to me that as well as being safe, our passengers feel safe and confident when they travel with us. It is not acceptable for anyone to experience this type behaviour and, although rare, will not be tolerated.”

Charlotte is the latest regional journalist to reveal she has suffered sexual abuse and harassment in recent years.

Last year Oxford Mail editor Samantha Harman hit out on Twitter about being subjected to “sexual and aggressive” abuse while out running, while in 2017 then-Huddersfield Daily Examiner reporter Susie Beever, who now works for the Yorkshire Post and Yorkshire Evenign Post, spoke out after being sexually assaulted while conducting a vox pop.

Speaking to HTFP about how colleagues and readers had reacted to her ordeal, Charlotte said: “The support has been fantastic, both from my own newsdesk and colleagues at the Manchester Evening News, and also from strangers and other passengers in Manchester – many of whom have shared their own unpleasant experiences of tram harassment.

“There are a huge number of women who have come forward on social media with tales of being groped, intimidated, or verbally abused while travelling on the Metrolink service, including from other female reporters. It happens at any time of day and is an endemic problem within the service. Hopefully the attention the video has received will push bosses to tackle it more seriously.”