Cuts have taken dailies ‘down to the bone’, editor tells BBC documentary

The editor-in-chief of three daily newspapers has admitted that job cuts have taken the titles “right down to the bone” in a new TV documentary which airs this week.

Donald Martin, editor-in-chief of Newsquest Scotland, made the admission in The Papers, which will document the work of Newsquest’s Glasgow-based dailies The Herald, The National and the Glasgow Evening Times.

According to a preview of the series by Scotland on Sunday journalist Martyn McLaughlin, who has seen the first episode, Donald told the filmmakers around £1.4m had been cut from the titles’ editorial budgets.

However the documentary also showcases what Newsquest is calling the “incredible success” of Scotland’s two youngest papers, The National and the Sunday National – both founded after the independence referendum of 2014. 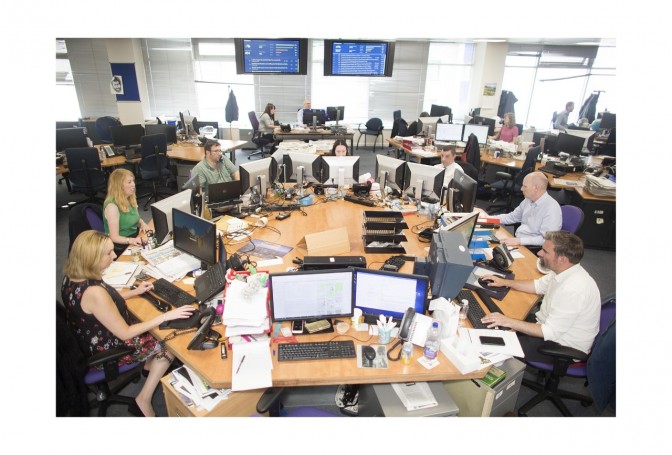 Editorial staff at The Herald

According to Martyn’s preview, Donald said: “In about a year we’ve probably taken about £1.4m out of editorial. That’s a hefty, hefty number.

“Those cuts we’ve made have taken us right down to the bone. It’s incredibly tough to produce quality newspapers if you don’t have the resources.

A description of the series on the BBC website says it will follow one newsroom and three “very different” newspapers “as they battle to cover one of the biggest political stories of a generation – Brexit.”

It adds: “These Scottish titles, one of them the world’s longest-surviving English-language daily, face their own existential battle, during the transition from print to digital.

“They are fighting to stay relevant to their readers at a time of intense competitive pressure. What is the impact of all this on editors and reporters as they struggle on all fronts to cover news and deliver it to an audience whose drift from print to the screen has become a digital flood?

“As Brexit reaches fever-pitch, The Herald and National titles are launching new Sunday versions and covering a major political story, while budgets are cut and resources become stretched.”

In an official Newsquest announcement about the launch of the series, Donald said: “We have a team of brilliant journalists working tremendously hard to provide quality content across all our titles, in print and online. Much of that great work goes unseen and this was a fantastic opportunity to provide a rare insight for our existing readership and, hopefully, engage with a potential new audience.

“I’m extremely proud of our editorial team and anyone watching will see why – they are eloquent, passionate, caring, professional and with a tremendous pride in what they do.”

Pro-independence title The National is currently the best performing newspaper in Newsquest, both in print and in digital, with the paper’s circulation up 11pc so far in 2019 and web traffic up 45pc.

Editor Callum Baird said: “In a crowded newspaper market, it’s clear that readers want a newspaper which fights their corner – and stands up for Scotland’s right to reject Brexit and choose a different path.

“Half of Scots believe Scotland should be an independent country, and we believe it’s very important that that position is reflected every morning in at least one newspaper.

“Although we do record podcasts, shoot videos, and publish liveblogs, the phenomenal success of The National proves that titles can also have a strong future in print if you put innovation at the heart of your newsroom.”

“The documentary gives a fascinating glimpse behind the scenes of The Herald and The National titles at a crucial time for Scotland and its journalism and underlines the need for a diverse and healthy indigenous media as we prepare to take the decision about our country’s future.”