A weekly newspaper’s story about a discarded pair of pants has prompted an online debate about the “death” of the regional press.

Senior industry figures were among those to defend the Derbyshire Times after it ran a story about a pair of black undergarments and a pink sock which were found dumped on a footpath 150 yards from the newspaper’s office.

The story became the most-read on the paper’s website over the weekend, and was even picked up by BBC Radio 2 presenter Jeremy Vine.

But it also prompted an online backlash from some quarters on social media, with one respondent describing the piece “pathetic trivial garbage” and urging Michael Broomhead, senior reporter on the Chesterfield-based Times, to report on stories affecting the Lincolnshire coast instead.

On FB someone has said that I should stop writing 'pathetic trivial garbage' and go to the coastal village of Ingoldmells in Lincolnshire to find some alleged murderers.

Andie wrote: “This is considered ‘news’ according to the Derbyshire Times these days. What an absolute shambles – clickbait nonsense. God knows what Mike Wilson [Times editor for 22 years] would have thought of this.”

“I don’t blame you at all for trying to get hits on the website. I know that’s what’s demanded these days, but it’s very sad. Pair of skiddy pants and a smelly sock found on path ain’t news, mate.”

He wrote: “Look on our website and in our newspaper and you’ll see countless examples of great journalism. This was one light-hearted piece I published over a weekend in which I wrote 17 hard news stories.

“I reported on an alleged attempted murder recently. I’ve also been covering ongoing issues with homelessness and crime in Chesterfield town centre. And tragically I’ve reported on a number of suicides lately.” 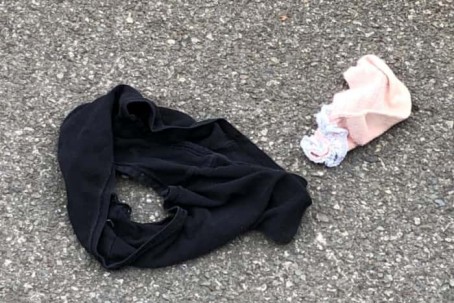 The discarded pants and sock which prompted the debate

Support came from Reach plc digital editorial strategy director David Higgerson, who tweeted: “Perhaps proof that anyone who thinks they can call the death of local journalism based on one article doesn’t really know that much about local journalism.”

John Furbisher, former editor of Sheffield daily The Star, urged Michael to “keep up the good work”, while other Twitter users claimed those criticising the piece had a “missing sense of humour”.

Michael told HTFP: “It’s good to see people coming to our defence. While some readers thought the item about the underwear and sock was pants, many people have contacted us to say it raised a smile and was a welcome brief read after recent doom and gloom.

“I think it’s ridiculous to say ‘RIP local journalism’ on the back of one piece – one light-hearted piece I published over the weekend when I wrote 17 hard news stories.

“Our newspaper and website feature countless examples of fine journalism – and of course we’ll continue to report the hard news people need to know about as well as the soft items which, judging by our web stats, many people relish.”