A weekly newspaper dedicated its splash to the memory of a murdered woman after having “second thoughts” about publishing her killer’s photograph on the front page.

The Medway Messenger ran a front page editorial explaining its decision to focus on Molly McLaren, who was stabbed 75 times in her car by ex-boyfriend Joshua Stimpson.

Stimpson, 26, was jailed for a minimum of 26 years for 23-year-old Miss McLaren’s murder following a trial at Maidstone Crown Court.

But the KM Group-owned Messenger chose to concentrate on “a stunning young woman with her entire life ahead of her” in its front page tribute, with more trial coverage inside. 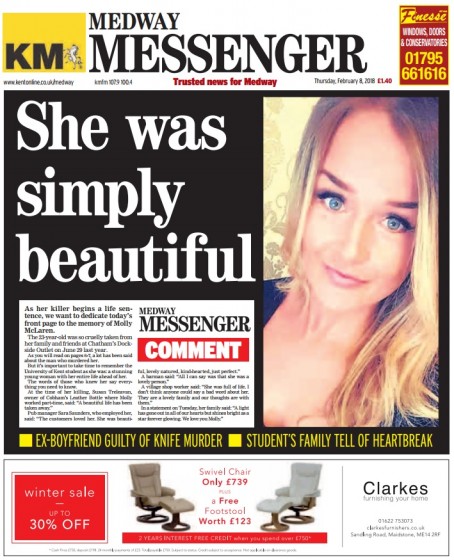 KM Group editorial director Ian Carter told HTFP: “The murder of Molly McLaren was a terrible crime and one that took place very close to our Medway office. We had obviously been following the story very closely over the past eight months, and when Joshua Stimpson was convicted of her murder in we were mindful of our role in the community.

“After laying our a more traditional splash, we had second thoughts and decided it was more appropriate to focus on Molly’s memory rather than put Stimpson on the front page.

“It’s not a case of self-censorship or shielding readers – the coverage inside the paper was as in-depth as you would expect.

“It was simply a question of taking a more community-focused approach to a story that was also receiving extensive national coverage. Reaction from readers has been universally supportive.”