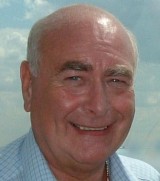 A former editor who was responsible for a number of weekly newspapers and could write shorthand at 150 words per minute has died aged 74.

Derek Hunt, left, was group editor for a number of editions of the Guardian series, in Cheshire, during a 36-year career in newspapers

He also worked for the Lancashire Evening Post for 13 years beforehand, where he rose to the position of assistant editor.

After leaving journalism, Derek started his own public relations consultancy and counted the now-defunct Vale Royal Borough Council among his clients.

Born in Warrington, where he would live all of his life, Derek decided he wanted to be a journalist while helping to produce a school newspaper.

While attending a secretarial school, where he was the only boy in a class of 20, he gained shorthand and typing qualifications before landing a job as a trainee reporter with the Cadishead and Irlam Guardian.

After 18 months he was transferred to the Warrington Guardian as deputy chief reporter and remained there for just over three years.

He then joined the Lancashire Evening Post’s Wigan office as a reporter and took charge of offices in Warrington, St Helens and Leigh before returning to Wigan as news editor and later assistant editor.

A Guardian obituary states: “Although offered employment on several national newspapers after supplying them with stories over the years, he preferred to work and live locally with involvement and commitment to the local community.”

After 13 years with the Post, Derek returned to Warrington to help with the launch of a new title, before being appointed editor of the Cadishead and Irlam Guardian, followed by editorships of the Newton and Golborne News, Runcorn Guardian and the Northwich Guardian.

His appointment at Northwich later resulted in him being made group editor for the Guardian’s Mid-Cheshire editions including Northwich, Winsford, Middlewich and Knutsford Guardians, while role was later expanded to take overall control of these titles plus the Altrincham, Sale, Crewe, Nantwich and Congleton Guardians.

After leaving the industry and launching his PR firm, Vale Royal created nd offered him the role of press and public relations officer, a post he held until he retired in June of 2002.

The Guardian obituary adds: “Derek was a prominent Freemason in Warrington and throughout the Masonic Province of West Lancashire. He was editor of the province’s magazines and website and was the press and communications officer for several years.

“He was appointed and invested as a Past Provincial Grand Director of Ceremonies by HRH the Duke of Kent. Derek was involved with many organisations including being a director of the Cheshire Board of the Prince’s Trust.”

Derek, who died on 11 July, is survived by wife Jean, son Paul and grandson Ethan.