An urgent appeal has been launched to help the widow of a former regional press journalist after revealing she may have to leave the country with their baby daughter following his sudden death.

Jacky has now opened up to Tristan’s old newspaper about the “nightmare” scenario she is facing, saying she is worried about how she will make the next mortgage payment on the family’s “dream house” in Saltash, Cornwall.

She is also not yet a British citizen, and now fears she and Mia may even have to leave the UK. 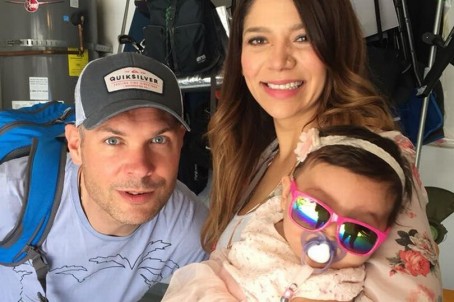 Tristan with Jacky and Mia

Tristan, who won several awards during his career for his work as The Herald’s defence reporter, left no will or insurance cover, and Jacky is unable to access cash from his bank account at present.

Now a fundraising campaign to help Jacky and Mia has been launched, with more than £7,500 being raised in its first two days.

Jacky told The Herald: “I want to stay in this country and I want to save this house – it’s where Tristan wanted Mia to grow up. I don’t know what my financial situation is. My life is up in the air, nothing is sure any more.

“I’m not a British citizen yet. The process was delayed. But I’d like to stay here, because of Mia. She will have more opportunities here than in Mexico. And I would hate to leave Tristan’s mother alone after what she’s been through.”

“We were so happy but the life I had planned for Mia has come crashing down.”

“I feel lost. And I look at Mia and see her smiling, she has no clue about what’s happening, but she will grow up without her dad. I will keep working to give her everything.”

Tristan finished the first of his two spells at the The Herald in 2012 to live in Tijuana, Mexico, after he met and fell in love with Jacky, who had been in email correspondence with him for seven years.

While living in Mexico, Tristan worked as a news anchor for U-T TV, based in San Diego, before returning to England with Jacky and undertaking a second 10-month stint as The Herald’s defence reporter. Since 2015, he had worked as the Royal British Legion’s South of England public relations officer.

Appealing to her followers on Twitter, she wrote: “This is terrible news. Tristan replaced me as defence reporter at the Plymouth Herald and was easily the nicest, least sweary journo I ever met. His family need your help.”

More than 150 people have so far given to the campaign. To donate to the appeal, click here.