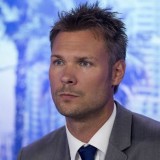 An award-winning former regional journalist described as a “top class reporter” has died suddenly aged 40 – just four months after becoming a father for the first time.

Tributes have been paid to Tristan Nichols, left, who spent 14 years in total with Plymouth daily The Herald – covering wars in Iraq and Afghanistan during his time as the newspaper’s defence reporter.

Tristan won South West Daily Print Journalist of the Year in 2012, while he was awarded the Operational Service Medal for his work from the front line and named a Friend of the Forces by the Royal British Legion in 2010.

He left The Herald for the first time in 2012 to live in Tijuana, Mexico, after he met and fell in love with his future wife Jacky, who he had been in email correspondence with for seven years.

While living in Mexico, Tristan worked as a news anchor for U-T TV, based in San Diego, before returning to England with Jacky and undertaking a second 10-month sting as The Herald’s defence reporter.

He left The Herald for a second time in 2015 to become the RBL’s South of England public relations officer.

Bill Martin, editor-in-chief of The Herald and the Western Morning News, said: “Everybody here is absolutely devastated by the news. Tristan was an integral part of the Herald family, even after he had left us to work first in the States, and then for the Royal British Legion.

“To say he was popular would be an understatement. It was impossible not to love him, and everybody did. I clearly remember the first day he came to us on work experience – he was overflowing with eagerness and enthusiasm for the job.

“That never really went away and he became a top class reporter as a result. His work as defence correspondent was outstanding, particularly when he was reporting back from Afghanistan.

“But there was much more to him than his work. He loved music, art, and fashion, and had a very close-knit group of friends and family. A couple of my colleagues saw him in the last week or so and said he seemed like the happiest man alive. That just makes the news even harder to take.”

According to an obituary on The Herald’s Plymouth Live sister website, Tristan was also a talented musician whose looks even landed him some work as a male model.

Tristan and Jacky had married while living in Mexico, and their baby daughter Mia Luna was born in June this year. He died suddenly at his home in Saltash, Cornwall, on Friday.

Herald print editor Clare Ainsworth, who worked with Tristan for many years, said: “Tristan was one of the best journalists and one of the nicest people I have ever worked with. He was a determined yet brutally honest reporter – a rare mix in modern journalism.

“When he left The Herald to join the Royal British Legion we lost a brilliant defence reporter. But the RBL gained a champion of the armed forces who continued to write with passion in support of veterans.

“Tristan was hugely popular but had time for all his friends. He will be so sadly missed by his family, his colleagues and all the many people lucky enough to meet him.”

Johnny Mercer, Tory MP for Plymouth Moor View, first met Tristan when he was serving in the Army.

He said: “Tristan lived an amazing life – I can’t believe he’s gone. He had an energy for life that was infectious and his exploits were straight out of a film. He was the nicest bloke.”

David Wells, who works for Forces Network news service in London, added: “Tristan had such an effervescent and charming personality. You only had to meet him once and he was your friend and inviting you to social gatherings, a genuine quality that served him well in his journalism as much as his personal life.

“I remember him putting me up in his home after a night out the first time I’d met him. He will truly be missed by all.”