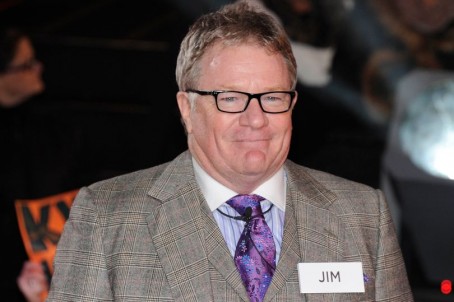 A regional journalist has shared his pride at being the subject of a four-letter onstage rant by comedian Jim Davidson.

Cornwall Live’s Lee Trewhela says he will wear Mr Davidson’s insults as a “badge of honour” after the former Generation Game and Big Break presenter launched an on-stage tirade at both him and the website he works for during a concert in Redruth.

The controversial stand-up had previously contacted Cornwall Live to say he was cancelling the show after it published a story written by Lee highlighting local opposition to his planned appearance.

Mr Davidson, pictured below, branded Lee a “twat” on Twitter and claimed “the shit newspaper are trying to spoil things,” although Cornwall Live is in fact a digital-only product. 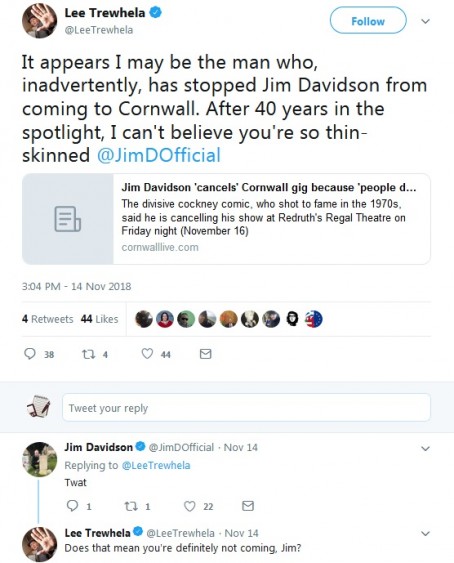 He later  tweeted: “Do you really believe I would let a two bob reporter from a shit leftie newspaper stop me from coming to do a show for 600 people?  Print that areshole (sic).”

The gig duly went ahead, and Lee was sent to review it – returning a rating of one star out of five.

Addressing the crowd in Redruth, Mr Davidson said: “I made it here courtesy of the s*** local newspaper. It’s not even a newspaper, just some bloke trying to make a name for himself.”

He went on to describe Lee, who has worked as a journalist since 1991, as a “spotty, pencil-neck millennial.”

In his review, Lee wrote: “I took it all in jest, though it was slightly unnerving when he told the crowd that he’d give them my address to baying cheers and applause. It felt like a Nuremberg rally for people who find the word P*** funny.”

“You know what he’s trying to say, he just doesn’t say it very well. But that’s why his audience love him. They’re sick of these politically correct times and this man bulging out of his suit, making fun of Japanese people’s eyes, is their saviour.

“After the performance, Davidson passed through the foyer looking uneasy and signing the odd autograph. I shook his hand and introduced myself as the ‘millennial reporter’. He looked nonplussed and shocked (the bald man in front of him was far from a millennial, admittedly), muttered “oh are you” and scuttled away in his fleece.

“Not even an eff you, not even a witty response. Perhaps ‘Jim Davidson’ is an act, after all. If it is, it’s one that needs to be put out to pasture.” 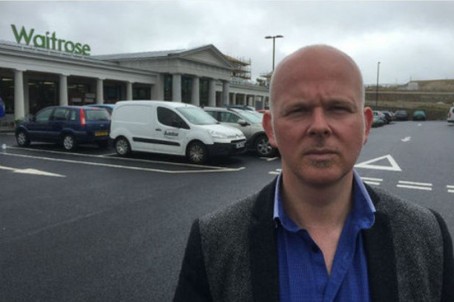 Lee told HTFP: “Having Jim Davidson call me not only a t**t but an a***hole and a scrote following stories we ran was something of a badge of honour.

“I’m not sure what it says about the comedian that he was quite so obsessed with slagging both me – a ‘millennial’ reporter who is anything but a millennial – and Cornwall Live (which he still thinks is a newspaper … not that he’s stuck in the 1970s, of course) during his show in Redruth.

“I would like to thank old Nick Nick for the amount of page views the stories generated and I’m sure he was pleased with the most amount of press he’s received since, possibly, 1983.”

HTFP has approached Mr Davidson’s management for a comment.