Striking journalists have received cross-party political support as they take part in a one-day walkout over what they describe as “poor pay” today.

National Union of Journalists members working for Newsquest Cumbria are carrying out the strike, with pickets arriving just after 7am in Workington and Carlisle.

The newspapers affected by the strike are the Carlisle News & Star, the Cumberland News, the Workington Times and Star and the Whitehaven News. 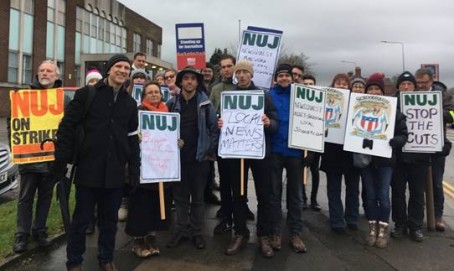 Tim Farron, former Liberal Democrat leader and MP for South Lakeland, said: “Our local reporters here in Cumbria aren’t just writing about our communities, they are part of those communities – they are the glue that keeps our community together.

“That’s the key to a good local newspaper. We are lucky to have so many excellent journalists writing for fantastic papers and they deserve to be fairly rewarded for the work that they do.”

Stewart Young, Labour leader of Cumbria County Council, added: “Skilled and experienced local journalists are a key part of our democratic structures. Whilst I’ll be the first to say they don’t always make our lives easy, I’ll clarify that by saying nor should they.

“They disseminate information to the public, organise campaigns, and in the finest examples of work they hold organisations like ours up to public scrutiny. To lose such a crucial link, is a major loss for us all. That is why I support this industrial action taken here today.”

Rory Stewart, Tory MP for Penrith and the Border, said: “Strong, vigorous local newspapers are a vital part of local democracy. Journalism is extraordinarily important. We will only keep it alive if we reward journalists properly.”

Jane Kennedy, NUJ Northern and Midlands organiser, said: “We’ve had a great turnout on the picket lines this morning, people really do care about local journalism because news is a public service, people need to know what is going on in their communities and we all need local, accurate and timely information.

“Newsquest are making severe cuts again and again; they are slashing front line journalism, jobs and paying out thousands in perks to those at the top of company. Newsquest are systematically asset stripping local journalism in this country and they must be stopped.”

NUJ members at the Cumberland News revealed on Tuesday that they had taken the unprecedented action of taking their own paper to the Independent Press Standards Organisation over its coverage of the strike, saying it had only reported comments made by Newsquest about the action.

A Newsquest spokesman said: “It is disappointing that the NUJ has taken this stance. The NUJ pay dispute dates back to before Newsquest acquired the loss making CN Group in March this year.  As a result of Newsquest’s involvement, all staff are now in a far more secure position than they were beforehand.

“Since the takeover Newsquest has secured the staff pension benefits, we have invested in new state of the art technology and we have actually increased the number of reporters serving the respective communities in Cumbria.

“We’re focused on doing all we can to address the challenging financial situation that the company found itself in before our involvement, and are taking steps to put the business on a much surer footing for the future so that it will be able to sustain quality local journalism for many years to come.

“This will ultimately benefit all stakeholders, including members of the National Union of Journalists.”