A report on the aftermath of the Manchester Arena bombing has highlighted the “sympathetic reporting” of local and regional newspapers while criticising other media for press intrusion.

A review panel was set up by Greater Manchester mayor Andy Burnham in the wake of last year’s May 22 attack in which 22 people died, in a bid to identify the strengths and weaknesses in how the disaster was tackled.

In its report, published today, the panel says it was “shocked and dismayed” by the level of press intrusion in some cases, and calls for the Independent Press Standards Organisation to review its code of conduct on the reporting of such incidents.

But the report, written by former head of the civil service Lord Kerslake, also singled out the Manchester Evening News and other local newspapers for their “sympathetic” coverage of the incident. 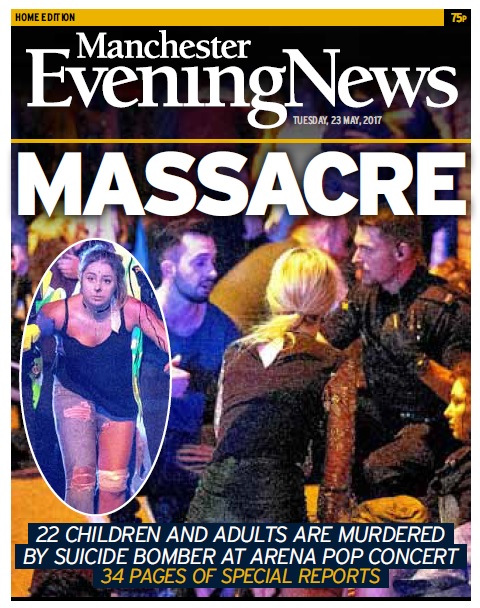 One family member affected by the tragedy said:  “The information in the Manchester Evening News was correct but when national Press picked it up, it would change.” Another described their local press as “amazing”.

The report stated: “A number of families spoke in praise of sympathetic reporting by the Manchester Evening News and other papers local to the bereaved.”

MEN editor-in-chief Rob Irvine said: “Lord Kerslake’s report confirms that there is a positive role that the press can play in communicating on behalf of families and in fundraising.

“It mentions that the MEN raised a million pounds for the emergency appeal in 24 hours.The final total raised was £2.5 million which was included in the We Love Manchester Emergency Fund of £20m that is helping the bereaved and those most affected.”

“I am pleased to see that there is a recommendation that statutory responders should engage with local trusted Press and broadcasters as key participants in planning and rehearsing responses to major incidents.

“The MEN played a key role in helping communicating the facts to the public and we also gave a voice to the people of Greater Manchester who rallied together and around those affected by this atrocity.”

However the review also contained some damning criticisms of the behaviour of some other media following the attack.

The report states: “Most participants who commented on their experience of the media in the attack aftermath were negative. People talked about feeling ‘hounded’ and ‘bombarded’. Some described being put under pressure to participate in TV programmes.

“At the hospitals, families attending to look for missing loved ones and visiting the injured described having to force their way through scrums of reporters who ‘wouldn’t take no for an answer’.

“A member of staff on her ward spoke of a note offering £2,000 for information being included in a tin of biscuits given to the staff.

“Several people told of the physical presence of crews outside their homes. One mentioned the forceful attempt by a reporter to gain access through their front door by ramming a foot in the doorway.

“The child of one family was given condolences on the doorstep before official notification of the death of her mother.
Another family told how their child was stopped by journalists whilst making their way to school.”

In its conclusions, the report states: “The Panel was shocked and dismayed by the accounts of the families of their experiences with some of the media. They spoke of being ‘hounded’, of a ‘lack of respect’ and of ‘sneaky’ attempts to take photos when families were receiving bad news.

“To have experienced such intrusive and overbearing behaviour at a time of such enormous vulnerability seemed to us to be completely and utterly unacceptable.

“We recognise that this was some, but by no means all the media and that the media also have a positive and important role to play. We cite some positive examples, particularly in respect of the local newspapers, in our report.

“However, it is clear to us that the behaviour of some of the press in particular fell well below the standards that are set out in the Editors’ Code. “

The review makes a number of recommendations in relation to the media, including that the Independent Press Standards Organisation – the Press regulator – introduce new guidelines on reporting the aftermath of terror attacks.

It says: “The Independent Press Standards Organisation (IPSO) should review the operation of its code in the light of the experiences described by contributors to the Review and consider developing a new code specifically to cover such events”

The Society of Editors has described elements of the report as “concerning” and conceded that there had been some instances where journalistic practice had fallen short of the standards expected.

Executive director Ian Murray said:  “There are strong guidelines in place for both the press and broadcast media but it appears that in a number of cases adherence to good practice fell short of the standards that I am certain every newsroom would expect their staff to adhere to.

“Whilst it is understandable that during the initial aftermath of an event such as the terrible terror attack in Manchester there will be some confusion and errors will be made as journalists attempt to undertake their legitimate role in providing accurate information, every step should be taken to ensure that intrusion into grief is handled sensitively and journalists do not add to the obvious distress of victim’s relatives and loved ones.

“Going forward the Society will support any initiative whereby statutory responders and the Independent Press Standards Organisation can work with media organisations to explore ways in which any lessons can be learned whilst recognising the importance of the media in reporting on matters of legitimate public interest.”

The wider focus of the report is on the response of the emergency services and statutory authorities and there is strong criticism of the fire service in particular.

Nevertheless, it found that the story of the response on the night was overall “overwhelmingly positive.”