A regional daily has reaffirmed its support for a bottom-of-the-table football club after running a poll asking whether supporters backed him.

The Chronicle, Newcastle, says it is “100pc behind” Newcastle United boss Rafael Benitez, despite his side sitting bottom of the Premier League table with just two points from nine games.

The Chronicle previously called for Benitez to stay on Tyneside following United’s relegation in 2016, and has also issued several front page pleas to club owner Mike Ashley in recent years following a perceived lack of investment in players and infrastructure.

But, in a question and answer session with The Chronicle’s Newcastle United editor Mark Douglas, one reader asked whether The Chronicle remained in favour of Benitez staying in charge after polling United supporters on the issue. 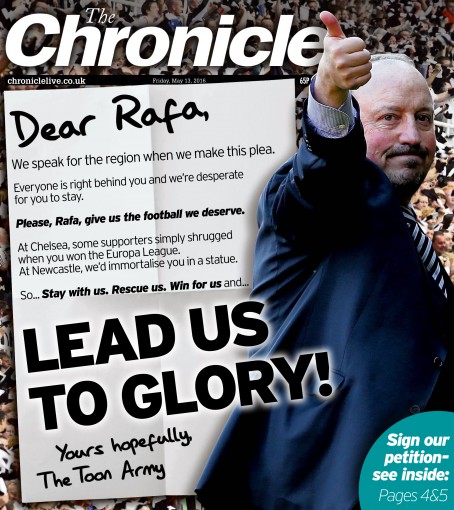 In response, Mark said: “I saw a bit of criticism of the poll, and a few people seem to think – I’m not sure how, given the fact all three of our front-line writers have written pieces backing him since Brighton – that we’re starting to turn on Benitez.

“So for the record: The Chronicle’s editorial stance – from the sports department – is we’re 100pc behind Benitez, we know where the problems at the club lie, we are a critical friend of the club and we’re listening (and reporting) on fan movements and protests. We are the only – stress, only – mainstream media to have covered [supporter group network] Magpie Group meetings.

“So: in short, show me why analysing a nine-game run without a win is ;siding with Ashley’ or ‘not backing Rafa’. I know we’re all jumpy at the moment but I don’t see it.”